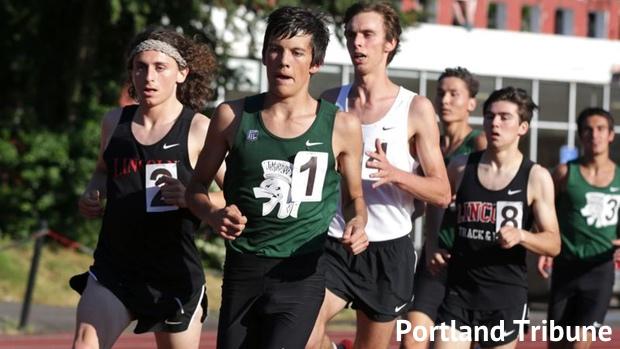 In fact, the University of Washington's High School Invitational at the Dempsey Indoor track on Saturday will be Slenning's first appearance in an indoor meet in two seasons and will be the only competition of his winter campaign.

But for Slenning, who will compete in a fast 3000m field, that doesn't bother him one bit.

"I still feel pretty good," Slenning said. "I know I can still run fast and sprint, and I haven't worried about doing too much training for it. Definitely later in the (outdoor) season I'll be more confident with racing. But I'm not worried now."

The junior enters the 3000m field as the top-ranked runner, having nailed a time of 8:26.41 at the Oregon track and field outdoor championships in May, when he finished fourth. He'll be stacked against nine athletes with times under 8:50 from either the outdoor or indoor season.

The meet record at UW's High School Invitational is 8:43.

"He ran 9-flat as a freshman, so we always knew he had the talent," said Thor Esbensen, Slenning's high school coach. "We were actually surprised with that time. He had been running good workouts, but that 8:26 kind of came out of nowhere."

Slenning, a 1500m and 3000m runner over the outdoor season, finished third at the Oregon State Athletic Association's cross country championships in November with a time of 15:29. He split a 3:58 in the 1500 over a 1-mile race at the Nike Jesuit Twilight Relays in April as well.

More than anything, Esbensen said Slenning remains a confident athlete anytime he steps on the track.

"He's a tremendous competitor," Esbensen said. "He lives for that. He loves running fast and our biggest chore sometimes is holding him back because he does like to get out there and run fast. He loves competing, and anytime he puts on a singlet he gets geared up and gets after it."

Slenning and his teammates also have fun.

While the indoor season remains a club format, the team typically runs under the organization "Hillsdale Harriers." But since Esbensen's Wilson athletes would be running in their only indoor meet of the season on Saturday, they decided to make an executive decision on their name.

"It was actually one of my teammates ideas," Slenning said. "He filled out the entry first and decided to call us 'Thor's Hammer.' We're going to wear white jerseys with a Trojan logo on it."

Esbensen, who's in on the joke, said he didn't mind the name change -- it was kind of a compliment, actually.

"The boys were having fun," he said.

All Slenning has to do now, he believes, is run up to his potential. While snow storms in Oregon have curtailed training, yielding just one 1600m workout and mostly base mileage for the outdoor season, Slenning continues to think positively.

"I don't think it will affect me much," he said. "With stress and stuff, I let it roll off my back. I'll be fine. I know I can run the way I can and will."

"We don't talk a whole lot about race strategy and pacing," Esbensen said. "He's a natural racer, and we mostly get out of his way. When he gets to the line, we tell him to go and he can feel it out."

From here, Slenning has a few meets planned outdoors -- regardless of weather in Oregon. A neighbor school in Portland, Roosevelt High, is putting on a distance carnival in February.

Slenning said he's going to try the 2000m steeplechase. From there, Ebensen said, there will be another 3000m run in Portland.

"We'll start scripting stuff as the season gets underway," he said.

But first, Slenning will try his hand at the 30000m at Dempsey Indoor, which is a track that has been known to produce some fast times.

"I definitely want to win," Slenning said. "That's the goal. And time-wise, if I could get anywhere around 8:30, that would be my goal right now. All I have to do is get out fast and run from the front."