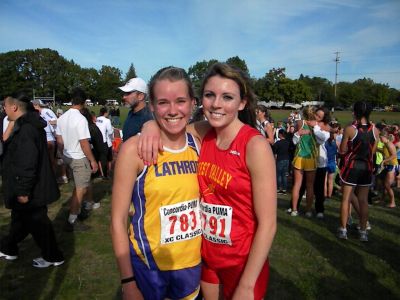 While runners in Oregon, Washington & Idaho are waiting to start official practices, athletes in Alaska have already begun their competitive season.   Many fans are no doubt more than happy to get the new season underway given the controversy in last year’s  State meet:  at least on the girls side.  It is especially hard to forget, because Megan Edic of Lathrop, who was credited with third officially has returned a winner.

Megan of Lathrop won the year’s first event of the Alaskan season on Saturday in Fairbanks.  Like last year she won the West Valley Invitational, which was held on the University of Alaska Fairbanks course, which also doubles as a cross country ski trail.   Her winning time of 12:56 for 3,200 meters is actually a second slower than last year’s but then a win is a win. Lathrop runners Brooke Lizotte & Allison Hebard placed second and third in the race, which thus far has produced little results.  That is not uncommon, however, as often the meet has been impacted by the lack of training time of many would-be participants.  The meet had been intended last year as a 5K but was shortened due to training issues.   Numerous runners last year could not run officially due to lack of practices & it is assumed that this is the case in 2011.   West Valley runners have not been reported but with the meet essentially being a dule meet between West Valley & Lathrop we know that at very least Lathrop won 26 to 29.  Lathrop’s Sydney Stone placed sixth in 14:33 & her team mates added 8th & 9th.   Kyle Hanson of Lathrop also won the event last year but his time improved from 16:23 to 16:16.   Hanson placed fifth in the large school division last year.  Keegan Rankin was the next Lathrop finisher with his sixth place time of 11:27.

Perennial power Kodiak won Tuesday’s Twilight Meet at Colony High. Chris Christiansen, ninth at State last fall, won the 2.4 kilometer event with an 8:09 clocking.  Mason Mintura of Palmer finished second in 8:13 and was followed by Chris Osiensky (8:15) of Palmer, Jordan Fogle (8:2) of Kodiak and Noah Ripley (8:22) of Wasilla.  The team scoring, which was based upon the combined times of the boys & girls, saw the Kodiak guys win with a low of 100 points to 101 for Colony & 105 for Wasilla.   Audrey Michaelso, who was credited with fourth at State last fall, won the girls’ race with her time of 9:55.  The Colony runner defeated Mariah Burroughs of Wasilla, who ran 9:59.  Jenna Ford, fifth at State in 2010, of Wasilla earned third with 10:01 & was followed by Bailey Meir (10:04) of Colony & Hana Bohman (10:09) of Palmer.

Monday witnessed the Nikiski Class Races held at the school of the same name.   The race format has senior & junior boys raced together, while sophomore & freshman boys run in a separate race. The racing format is held for the girls’ races.   Bailey Beeson of Kenai had the best time of all young ladies, when she won the upper-class division in a time of 21:17 for 5K.  Placing second in the division was Bree Mucha of Soldotna, who garnered 11th in last year’s State meet.  Bree ran 21:27 at Nikiski. Third in the elder division & third overall was Claire Trujillo of Grace Christian, who ran 21:41.  Her sister Anna ran 22:00 to place 4th in the race & 5th over-all as far as time.  BethAnne Davis of GCS came in with 22:10.  Colette Ohotnicky of Holy Family won the Freshman/Sophomore race easily with a time of 21:58, which was the fourth best time among all girls.   Grace Christian’s Elle Arnold (22:01) & Cheyenne Applegate (22:28) took second & third in the division. Danielle McCormack (22:51) of Soldonta & Cassidy Soistman (22:56) of Homer followed in 4th & 5th.  Tiffany Bolyard of Kodiak led her team by earning sixth in 23:05.  Only one guy managed to break 18 minutes on Moday and Seward’s Miles Knoter won the race with 17:42.  Kodiak’s Jared Fogle secured 2nd with 18:02 and John Klein of grace claimed third with 18:13.  Just behind  Klein was Kodiak’s Derrick Deal, who placed 4th with 18:15.  Fox Michaud of Kenai won the boys’ Freshman/Sophomore race in 18:24, which was the fifth best time overall.  Hans Karlberg of Grace ran 18:38 to place second in that division and sixth overall.

I would be remiss in failing to go a bit into the problems in last year’s State meet, which saw the use of finishing chips for the first time.  The chips were attached to the shoe laces and with the heavy mud there were even more problems.  To start with Jami Bethea of Kodiak & Jeanette Northey of Service came across the finish line together.  Everyone watching the race believed Northey had won, because her torso beat Bethea’s.  Even the two contestants concurred by the chips in the shoes recorded Bethea the winner and that was that.  Photos, naturally, disagreed with the official results but the state would not listen.  It quickly became worse, when Molly Callahan of West Valley came across the finish line alone in third.  Unfortunately her  chips had been lost in the muck and even though the state had a back-up timing system & Callahan was obviously the their place finisher the officials stood by their egregious error. The DQ of Callahan also cost her team at least fifty points to compound the problem.

We met Megan & Molly, as well as Jeanette Northey at the Concordia Puma Invitational last fall & here is whole story from the girl’s perspective.

Immediately after the race my wife, who has taken so many pictures through the years of XC runners, spoke with the girls. Megan‘s mother immediately identified herself as the mother of the daughter, ‘who was awarded third place in that race but tried not to accept it’. It was hardly a surprise as that is the spirit of a true cross country fan, parent & runner. Both runners then were kind enough to chat with this reporter soon after that. Arm in arm for a bit they chatted about the race with such dispassion that one had to be impressed with the girls, as well as proud to be a part of this grand sport. They joked about their race at State as well as their race on this “easy” course, where they both set personal records.  Their spirit & attitude affirms what I have always loved about this great sport and in relating it, I hope you understand these are two quality young ladies! On this day Molly Callahan of West Valley High in Fairbanks placed 6th overall & won her separate duel with Megan Edic, who finished 12th overall.  Their times, both personal bests, of 18:28 & 18:35 are quality times and were earned two weeks after their State meet. Impressive results & impressive young ladies!

Rules are met to help people in their affairs including sports.  Let us hope that the state does something to make sure this type of occurrence does not happen again.  We do at least have a clean start in Alaska as the young athletes point to this year’s State meet.