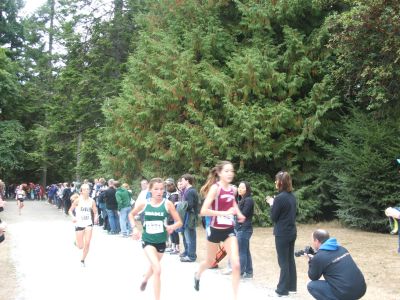 Lincoln  Park in West Seattle was the site of the Sundodger Invitational.   After being solely a collegiate race high school divisions were added making it an event that is even more interesting.  The race now offers fans a chance to watch former prep runners, who have moved on to the collegiate level, as well as current high school runners.  Any doubt about that move should have been quickly silenced, when the race offered to brilliant head to head races in both the girls’ and boys’ competition.   Those match-ups produced not only stellar racing but brilliant times, which will be noted on the national scene.

After temperatures in the nineties the weatherman offered reasonably cool weather and, although it poured during our drive north to Seattle the rain held off for the most part.   It was such a nice day that the race starter pronounced that “it was the first time in history the course is not muddy”, which of course was not true but it at least set a positive note to the day.

Franklin Park is a fine place to hold a quality meet with numerous trails & the race has been set up to avoid the formidable hills and trails, which would certainly change the complexion of the race.  As it is the race offers a gentle grade down the hill allowing the runners to get out quickly and feel quite comfortable.   That aspect was quickly noted by Maddie Meyers of The Northwest School and Kendra Weitz of Shadle Park, who both got out quickly and seemingly immediately made it a two girl race.   They were out so fast that, when the duo reached the mile mark, reached the   mile mark in a blistering 5:33, Maddie looked over at Kendra and asked:  “That was a mile?”   Well it was more downhill than up but it was very fast – sounds better in French avec  vitesse.    They were in fact moving so fast early that only Kaitlin Kaluzny of A C Davis was truly giving chase and she was moving so quickly that in a minimum of 999 races out of a thousand, which would have been leading.

It was a brilliant duel with both runners racing side by side for the bulk of the race and they seemed to be working together until late in the race, when Maddie pulled ahead on an upgrade.   Kendra appreciated the surge and reminded herself to remain in contact and, as she began to close the gap, she thought:   “I can do this.”    Indeed she could and she not only caught up with Meyers but she pulled away to claim an impressive victory in a time of 17:21, which appears to be the fastest in the nation thus far.   It was a match between two Foot Locker  national finalist (the World Series & Super Bowl of prep cross country) and even Kendra’s brother Nathan flashed a look  of a bit of surprise over the size of the lead & then immediately beamed.

Maddie raced home second and was credited with a brilliant 17:27, although it appeared that the time was two seconds faster.    Meyers, who had spent time recently at her school’s “camp” and was a little sore from its regimen was her ever upbeat self and happy with her performance, which she proclaimed as her best ever  for the early season.   Kaitlin Kaluzny sped home alone in third with an exemplary mark of 17:41.   The course for the record appears to be a bit short & some officials say it measures 4920 meters but even that disparity does not change the overall quality of all three performances.

Kyra Burke of Inglemoor placed fourth in a time of 18:26 an soon the secondary leaders were be trickling in led by Hazel Carr of The Northwest school, who ran a very fine 18:33.  Five seconds later Brooke Kingma of Henry Jackson raced across the finish line, while Rachel Nelson of Walla Walla finished seventh in 18:42.    Alexia Martin of Kent Meridian claimed eighth in 18:42 jut behind Kingma and Bri Gibson of Snohomish (18:51) was ninth.   Her team mate Alexandra Dreher entered the chute two seconds behind her and Jessica Rawlings of Henry Jackson   took eleventh.    Brenna Peloquin, a freshman from Gig harbor, probably had the most challenging race of the day, as the race plan had been to hold back.  After the race she noted that it was difficult to hold back, while everyone else was racing away from her.   That meant that the young runner, who had the best time at last week’s Capital Invitational was forced to catch people from behind on the sometimes narrow path & her fourteenth in a time of 19:10.   I suspect that neither the time nor the place are indicative of her talent.

In the team competition Snohomish claimed the trophy with a low of 109 points.   Henry Jackson earned second with 133 points & Central Valley placed third with 157.   Henry Jackson triumphed in the guys’ team race with 109 points, while Wenatchee took second with 113.   There was a spirited battle for third place, which was garnered by Seattle prep with 132, as they edged both Gig Harbor & Garfield, who finished with 140 points. 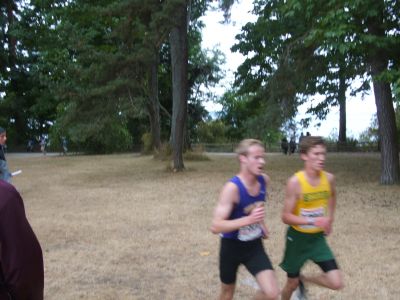 Even after the brilliant girls’ performance there was still anticipation in the guys’ race, which featured Foot Locker National qualifier Nathan Weitz and Jacob Smith, who had placed 17th in the US Junior XC Championship in a field with many collegiate runners.   As in the girls’ race the two moved quickly to the front and it was evident that this race would a worthy successor to that of the girls.  Once again the mile mark was passed “pretty fast”, as Nathan Weitz put it succinctly.   However fast it was Wenatchee’s Jacob Smith was right with him and once again we would witness two quality runners running shoulder to shoulder .    Further echoing the young ladies’ race was the fact that Nicholas Boerma of Wenatchie was left for most of the race to race alone in third in an effort, which normally would b leading.

Neither of the leaders were backing off the pace and they zipped by the two mile mark in quick 9:47.  They essentially remained side by side until late in the race, although Smith did get a shoulder in front briefly but Weitz opened up on the final hill and pulled ahead on the ensuing stretch to the finish to win in a very fast 14:33.   Even with the slightly short course his time equates to a brilliant 14:41, which is the actual time, which was credited to Smith, who followed him.

Boersma raced home alone in 15:06 in a time most preps would be thrilled to run & Joe Hardy of Seattle Prep ran a fine 15:20 for fourth.  Fifth place went to J P Wolpert of Walla Walla, who ran 15:23 and finished five seconds in front of Skyline’s Keegan Symmes.   Jamie Coughlin of Garfield,  who crossed the line in 15:31, which put him four seconds ahead of Michael Corr of Seattle Prep.   Ninth place went to Aaron Row of Henry Jackson (15:38).   Scott Schmitt of Lake Stevens took tenth in 15:47 and Timothy Delcourt of Kwantlen Park edged Daniel Schulte of South Kitsap for eleventh, as both were credited with versions of 15:28.

Fans were treated to some great and spirited running, which was of national quality.   It offered an interesting pack accomplishment on the part of Gig Harbor, who did not have a frontline runner but had a pack of Will Drinkwater, Casey Peloquin, Tristan Peloquin, Luke Hoffman and Joseph Gagliano, who all finished in a spread of eleven seconds, as they finished between 23 & 37.  That allowed the Tides to equal the total of Garfield and with their sixth runner  Logan Carroll placing 56th in the team scoring they placed fourth ahead of their rival whose sixth man  finished 103 (team scoring).