You just have to love cross country, especially the purity of the high school version.  We drove across the Columbia River to watch a double-dual meet between Union and Evergreen, as well as another between Camas and Mountain View.   On paper it would feature a match-up of two precocious freshmen:   Alexis Fuller of Union & Alexa Efraimson of Camas.   They earned the top two spots at the Run-A-Ree- early in the season and then ran strong races at the Danner meet last Saturday, but were sadly in different divisions.    Their match-up could have been most interesting.

When the race began Sabrina Sears of Evergreen took an immediate lead and was shadowed by a trio of Union runners:   Sere Brown, Kaitlyn McKinney & Alexis Fuller.  Other runners ran in small packs further back & we did not see Efraimson.   The runners  raced out of view and, when they returned to view Sears still held the lead, while the Union trio followed about five meters behind.   Sears dutifully worked her way up the hill, and I do mean hill.  This was not the usual gradual incline that some call a hill but the real deal with a rather steep grade.   The Union runners ran loosely and it seemed like they would soon overtake the leader but Sears had picked up some ground by the time she had reached about the half-way point in the hill, which also happened to be the mile mark.  She passed that mark in 6:28 and like the New York state motto, Excelsior, she continued to charge ever upward.

Sabrina then disappeared from sight and was next seen reaching the two mile mark in 13:45.   She had widened her lead by that point and was on her way to victory with almost a half minute lead.   She crossed the finish line in 20:56, which was only about thirty seconds off her PR:   a very credible performance considering the long & steep heel and the fact that she had been forced to race alone essentially the entire event.   How could one not be impressed?!

The Union pack sauntered in with Sere Brown leading the way in 21:36 and they all were credited with the same time:  McKinney taking third & Fuller being credited with fourth.  Union runners went on to stake their claim to positions seventh through tenth to make sure that they won the team scoring.   Sadly the Camas & Mountain View runners can not be credited for their efforts, as their results have not yet been posted even though we are closing in on a full day after the race. 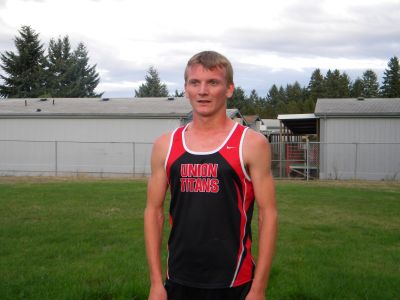 Roman Kirkov of Union is one of the top runners in southeastern Oregon and on Tuesday his team mate Tanner Sork stayed with him until the hill, where they parted company.   Roman, however, was not simply running a race, for he was wearing a camera, which was attached to his chest.  That was part of a project for an advanced photography class and it certainly was an intriguing twist.   What indeed had his camera’s eye caught?   Certainly a few of his challengers gave him a quizzical look as they ran near him.   With camera in tow he attacked the hill reaching the mile mark in 5:25 and was at the two mile with a solid lead in a time of 11:05.   .

His final time of 17:00 is misleading given the course and his margin of victory was seventeen seconds over his team mate Tanner Sork.   Camus runners, I believe, took the next two places but with no posting it is difficult to credit them.  We do know that Levi Sparks of Union placed fifth in 17:43 and Jonah Nibler led Evergreen with the seventh place finish in a time of 18:09. 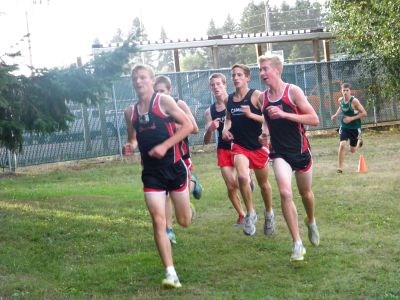