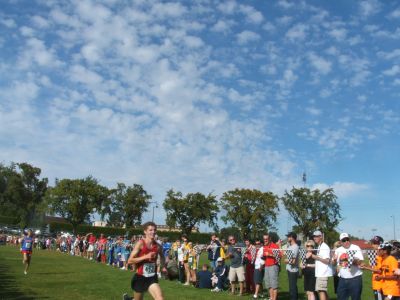 Although Alaskan runners had no action after their State meet the previous Saturday, there was a fair amount of action in the lower portion of the northwest.     Although not all teams, for sure, took advantage of the opportunity there were enough teams & individuals displaying their talents, and they should affect the national rankings.     What follows are just the highlights.

The 43rd edition of the longtime standard saw two course records fall.   Anthony Armstrong ran 14:52 on the three mile course breaking the record by three seconds.   Armstrong remains undefeated this campaign.   Santos Vargas also went under the old standard, as he placed second in 14:54.  Nicholas Boersma of Wenatchee has compiled a very fine record this fall and his third place time of 15:21 is yet another.  Joe Hardy of Seattle prep and Kai Wilmot of North Central followed with solid efforts to take 4th & 5th.    The North Central guys showed why they are highly rated with their low of 108 points, while Seattle Prep gave a good account of itself with a second place effort & 126 points.  Kamiakin placed third with 148 to Eisenhower’s 152.

Jordan McPhee has run well all season and the Richland meet was yet another example of why she deserves national attention.   Jordan broke away early and was never challenged and she also broke the course record.   Her time of 17:35 was almost half a minute ahead of Mayra Chavez of Eisenhower, who ran a fine race.   Lindsey Bradley of Richland took third with 18:04, while Stephanie Rexus of Kamiakin came in 4th with 18:11.   Elise Tello of Eisenhower, Jess Mildes of Riverside & Kaitlin Kaluzny of A C Davis earned 5th through 7th respectively.     In the team battle Henry Jackson won with 96 points topping Eisenhower with ten points.   Sunset of Oregon placed third with 146 points, while Central Valley edged Kamiakin 156 to 157.

Megan Fristoe and Travis Neuman backed up big races in Albany the previous weekend with triumphs on Friday.   Megan triumphed in a very solid 18:12 on a course that does not render fast times.   Piper McDonald, also from Summit, ran a very fine 18:23 to top her team mate Ashley Maton for second.  Ashley in turn ran 18:54 to edge Silverton’s Morgan Anderson by a second.   Bend’s Jenna Mattox came in fifth with 19:20 just ahead of Summit’s Kira Kelly.     The Summit girls ran away with the team race with 21 points as Tess Nelson contributed to the cause with her  9th place effort.   South Medford, which was led by Lauren Morgan’s 7th place effort, claimed second with 51 points to top Bend’s 83.

Travis Neuman broke away from his team mate Eric Alldritt on his way to a dominating victory in a time of 15:20.   Eric finished alone in 2nd with 15:58, as Hudson Eustace of Cascade Christian just missed the magic barrier with his third place effort of 16:05.   Travis Jantzer of South Medford (16:30) & Luke Hintz of Summit garnered the next two places.  Like the girls, the Summit guys scored in the team race.  Their total of 28 gave them a 31 point margin over South Medford.   Mountain View (Or) was third with 72 points.

Idaho runners were a major factor in the other varsity girls’ race but Alisha Luna of Klamath Falls ran away early to claim the individual title with 18:32.   Capital runners Julia Taylor & Savana Schilling scored the next two places with times of 19:47 & 19:55.   Mackenzie Caruthers of Borah followed in fourth with 20:07.  The team scoring in the race showed Klamath Union on top with 51 points, while Summit ‘s  “B” team earned second with 60.  Capital had 70 points, while Borah finished 4th with 145 points.    Alex Dillard of The Dalles Wahtonka ran away with the boys’ version of that race with a time of 16:03.  David Steele of Capital came in second, while Alek Angeli of Klamath followed in 16:25.   Nyssa’s Ryan Maag finished 4th ahead of Reuben Mulhern of Borah.

Hole in the Wall (Wa)

Amy-Eloise Neale returned to the Lakewood race and broke her own course record with a time of 17:44.   Her Glacier Peak team mate Katie Bianchini came home second in 18:15.   Megan LeGresley of Redmond earned third, while Sehome ’s Emily Pettis took 4th with 18:42, a second ahead of Sally Lawson of Cedar Park Christian.  Curtis King won his first major meet of the year by running 15:40.   Sehome ‘s Conner Johnson came in a second later and Ruben Riordan of Wright placed third   Tom Bradley of Blanchette took 4th a second later.   Sehome won the team race with 94 points.   Redmond came in 2nd with 108 and Ballard was third (174).

Sate of Jefferson (Or)

The concept of the invitational, which draws numerous teams from southern Oregon and northern California, stems from the pre-World War II effort to create a state out land from the two areas.   Especially with northern California being so different from the southern portion there still is some life in the thought but on Saturday the main topic of conversation was running.   The harrier, who did the best job of that, was defending Oregon 4A champion Zorg Loustalet of Henley, who broke the course record with his time of 15:39.  In spite offsetting a record Zorg had a great duel with John Whelan of Erna, Ca. who ran 15:40.   Paul Adams of Mazama finished third with 16:00.

Gracie Tostenson of Crater out-dueled her team mate Sarah Hastings with her time of 19:31 and won by eleven seconds.   Megan James of Shasta finished third in 19:53 nipping Sarah Estabrook of Triad Christian by a second.   Crater teams each triumphed, as the girls dominated with a low of 26 points and the guys had 53.   Ashland placed second in the girls’ race with 48 and North Medford was third.   The Shasta boys earned second with 95 but both North Valley with 100 & Roseburg with 102 were not far behind them.

The Clovis meet is perennially one of the major meets on the California scene but Dallan Farnsworth of Idaho gave it a northwest flavor with his third place finish and mark of 15:13.   C J Albertson, one of the top Californian runners, who like Farnsworth is on the national radar, came away with the victory with his clocking of 15:01.   The Buchanan runner beat second place finisher Bryan Guijaro of Knight by six seconds.     Karlie Garcia, a former Foot Locker national finalist from Oakmont, stormed to another victory:  her time of 17:22 saw her finish 21 seconds in front of Hagen Reedy of Buchanan.   Madelyn Askhelyi of Vista Del Logo took third in 17:53.

Gabriel Penk led the way with 16:34. The Wilson runner topped Nick Martin of Southwest Christian, who ran 16:37.   Rebecca Anna, also from SWC, topped the girls with her time of 19:52.  Newburg’s Talli Koskella placed second with 19:59.

The 31st edition of this meet saw Shelton ’s Cody Williamson triumph in 16:27.   Jon Jackson of Graham-Kaposin followed in second with 16:50.   Jadyn Gourley of Hockinson came home well ahead of the rest of the field with her mark of 20:03.  The battle for second went down to the wire with Rebecca McDonald of Tacoma Baptist getting the nod over Carry Larson of Centralia.   Their times were 20:47.01 & 20:47.53 respectively.

Sandpoint fans saw Ashley George victorious on Saturday with her time of 18:39.  The Timberlake runner beat Coeur d’Alene freshman Josie Brown by four seconds.  CDA runners claimed the next six places for a facile triumph.   Riley Estes of CDA was the only runner under 18 minutes with his time of 17:43.   Cody Peters of Lakeland finished second.

With Dallin Farnsworth competing in California on Saturday the Highland guys were left to run without their leader and it changed the outcome of the race, as Skyline topped Highland 29 to 39.  Austin Peila of Skyline won with a time of 17:02 edging Kaden Clay of Highland by a second.   Highland’s Presli Hutchinson won the girls’ race with her time of 20:01.  Kaitlyn Hill of Sugar-Salem placed second with 20:04.   The girls of Sugar-Salem edged Highland 28 to 32.

Twin Falls was the site of the Bates meet , which was held on Wednesday and hometown favorite Erik Harris led the way with his 16:09 clocking.   Boise’s Thomas Rigby came in 2nd with 16:19 & Jake Meeker of Mountain View (Id) placed 3rd in 16:29.    Emily Hamlin ran a  PR of 18:57 and the Boise runner topped Sam McKinnon of Mountain View placed second in 18:59.

Pocatello’s Elijah Armstrong won his second meet of the season on Wednesday with a solid mark of 15:29.   Trevor Clarke of Idaho Falls ran 15:46, which was good for second and James Withers of Snake River came in third with 15:56.  Cierra Simmons of Soda Springs scored with her time of 18:47 and led her team, which placed six runners in the top ten, to an easy victory.  Quincy Van Orden of Snake River claimed 2nd in 19:01.

VanCortlandt is for many the Mecca of American Cross Country running with all due apologies to Franklin Park in Boston, Kenosha, Wisconsin, Holmdel in NJ, Mt. SAC & Balboa in California, Sunken Meadow in NY and possibly Wappingers Falls in NY & Eagle Island in Idaho.  At any rate old Vanny has been a mainstay of harriers for quite a few decades now and in all that time no prep runner has ever broken twelve minutes on the 2.5 mile course until now.   Edward Cheserek of St. Benedicts ran 11:55 for his third course record in as many weeks.   The “old” record was 12:03.80 by Joe Rosa.  On hand to challenge or at least give chase were Tim Ball & Dustin Wilson and a host of top notch athletes but they were all left in his wake.   Ball captured silver with 12:21 & was followed by Wilson, whose 12:47 barely edged George Kelly.  Fayetteville-Manlius’ Nick Ryan placed fifth with 12:50.   Others to break thirteen minutes were Austin Lane, Daniel Galford, Matt Deyo, Mike McClemmons & Will Bragg.

Long a part of the Manhattan Invitational has been the Girls Eastern States and as usual this year’s field was excellent.   Jillian Fanning of Fayetteville ran a very solid 14:03 to win by almost twenty seconds, although she did not challenge Carly Seymour’s 2007 record of 13:55.               Briana Nerud of North Shore came in 2nd with 14:22 followed by Haley Pierce in 14:25.   Pierce of Tatnal, Delaware had just annexed the Great American the previous week.   Kelsey Margey ran 14:35, which was good for 4th, while Lizzie Predmore of Shenendehowa followed with 14:40.  Katie Sischo of FM claimed 6th with 14:41. Rachel Paul placed 7th (14:45), Annika Avery of FM was 8th (14:49), Samantha Nadal earned 9th (14:50) and Laura Leff of West Genesee garnered 10th in 14:57.  Others of note were Taylor Spillane of Champlain Valley (15:04) & Sara Sargent of Pennsbury, who finished 13th in 15:07.  A raw score in the girls’ team race shows Fayetteville-Manlius easily defeating Tatnal 45 to 83.  Cheverus of Maine had bad day & Canandaigua, also of note, had an off day as well.

Futsum Zeinasellassie also remained undefeated but he had a surprisingly hard time with Matt Dorsey, who is a fine runner but usually not quite in Futsum’s class.  Futsum, one of only three guys to qualify for Foot Locker nationals as a freshman, won with a time of 15:53 to edge his rival by a second.  Cole Hester ran 16:01 to place third.

Molly Seidel continues to roll over Midwest competition and her time of 14:3 was far & away the best time among the young ladies.

The Legends Meet in Maplewood, Ohio was established by Ted Rupe, who is a running legend in the state in his own right, to honor the greats of the past.  The meet has honored a number of notables in the past but this year it honored four runners are “the holders of five Olympic Gold Medals” between them although in truth Harrison Dillard ‘s total was four.  Bob Schul, the Olympic 5K winner, was also honored along with Briana Shook & Berenice Holland.   All legends were available for chat & autographs that weekend.  The winner of the boys’ race was Lakewood’s Nick Jablonsky, who ran 16:12.   Mitch Baum of St. Ignatius took 2nd with 16:28.   The girls’ title went to Selena Pasadyn of Brunswick, who ran 19:32.   Emily Sweet of Euclid followed with 19:42.

Erin Finn, a Foot Locker finalist, won her by over a minute with her time of 17:41.   The boys’ race was the opposite,  as both Cody Snavely  Brian Kettle being credited with versions of 16:11.  The former got the trophy.