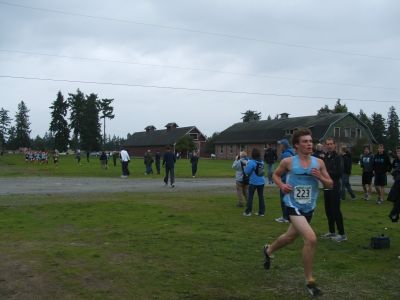 The Bellarmine girls & Gig Harbor guys performed, as most everyone would have anticipated and rolled to victory in the Narrows league Meet on Wednesday.   With a cloudy sky and a temperature a bit below sixty degrees the weather was almost ideal save for a moderate breeze but then the threatening rain held off, so few could complain.   Bellarmine has been the top ranked 4A team in the state all season & Gig has moved up to fourth among the boys, so there were no surprises in that respect.   The ease of both team’s triumphs, however, still was a bit beyond what most might have guessed.

The guys ran first and the race witnessed an un-named Bellarmine runner bolt into an immediate lead.   That surprise was short lived and by the time the runners could be seen off in the distance after rounding a far,  turn the light blue Gig uniform of Wolfgang Beck could be seen up front.   That point was some where around the half-mile mark with a time of 2:20.

Once again the runners disappeared but, when they reappeared shortly before the mile mark Beck remained in the lead, although he was a bit pressed by Shelton’s Cody Williamson.   The time was just around six minutes and it would be about the last point in the race that there would be any challenge up front.   After that point the course winds through a wooded area and then returns to view by a small lake.

Beck was the first to come into view around the 8:58 mark and by that time he had opened up a significant lead over a chase pack that consisted of seven runners.  Logan Carroll of Gig led the procession and was followed by Michael Thorsen of Central Kitsap, Casey Peloquin of Gig Harbor plus a quartet of runners, which included Tristan Peloquin of Gig & T J Grant of Bellarmine.

After that point they literally headed for the hills and ran out of sight until the last 300 or so meters of the race.   Beck cruised in alone with a time of 15:42 and his team mate Logan Carroll followed with 15:57.   Victory was assured for Gig Harbor when Casey (16:02) & Tristan (16:05) Peloquin secured third & fourth place after making moves in the hills.   Michael Thorsen claimed fifth in 16:07 and was followed by T J Grant two seconds later.  Joseph Gagliano came home in 16:13 taking seventh place to round out the Gig Harbor scoring and Peter Kesting of Olympia earned eighth in 16:13:   like Tristan, Kesting is only a freshman.   Cody Williamson finished ninth in 16:19 and Will Drinkwater of Gig rounded out the top ten with 16:21.   Zack Parker was the seventh runner from Gig Harbor, yet he placed 11th overall.

The team total saw a convincing victory by the Harbor with a low of 17 points to Bellarmine ’s 71 and South Kitsap earned third with 103 points.    While we are on the subject of team points, it is worth noting now that the Bellarmine girls scored a solid victory with a low of 33 points.   South Kitsap & Central Kitsap took the next two places with 78 & 87 points respectively, while the Gig Harbor girls finished with 94.

Handicapping the young lady ‘s race beforehand, it was anticipated that the girls’ title would be a duel between defending champion Daryl Phill of Bellarmine and freshman Brenna Peloquin of Gig Harbor.   That was a poor assumption, because Sofia Kane of Olympia had other ideas.   The race did start as anticipated with Phill and Peloquin getting away quickly but by the time the leaders had rounded the far turn at the 2:44 mark there was a trio of runners, who had opened a gap over the rest of the field.

When they once again returned to view around the mile mark (6:00~) the leaders had pulled far ahead of any would-be challenger.   Sharing the lead were Daryl Phill & Sofia Kane with Brenna tucked so closely behind the duo, that she could not clearly be seen in a photo.   As in the boys’ race the runners headed out of sight in the wooded area.  Once in view again Phill & Kane were up front with Peloquin a distinct third.

As they headed for the hill there is a slight grade approximating what skiers might refer to as a mogul and at that point it was clearly Kane, who had moved onto the offensive.   Daryl was then alone running in second and it appeared that Peloquin was beginning to struggle to maintain the pace, which she confirmed afterwards.   It appeared to be only a matter of time before Brenna fell well off the pace, yet the opposite happened and she regained lost ground on the uphill portion of the course.

The tide seemed to turn against Brenna once the leaders ran downhill, for Peloquin lost ground again to her rivals.   With three hundred meters to go Kane held a lead over Phill, who held a margin of ground over Brenna.  The stretch run saw Brenna Peloquin truly turn on the jets, as she rolled to victory in a time of 18:51.  That time marked a PR but more surprising was that it gave her a margin of victory of four seconds.  It was quite impressive under the circumstances.   Sofia Kane followed in second with a time of 18:55 and has to be credited with an impressive performance.   Daryl Phill claimed third in 19:02 despite it really not being her day:  something all runners can relate to sadly.   Rose Christensen of Central Kitsap fared quite well, when one considers she was well behind the leading trio with a mile to go.   She obviously made a late charge on the hill to claim fourth in a time of 19:04.

Jessica Peterson of South Kitsap came in fifth with a time of 19:17 and ran most of the race by herself.  Hannah Derby ran 19:27 to lead a parade of Bellarmine runners, who placed seventh through 11th respectively.  Those runners were Jordan Thurston, Zoe Willis, Izze Adams, Hayley Hustead & Danielle Rowe. 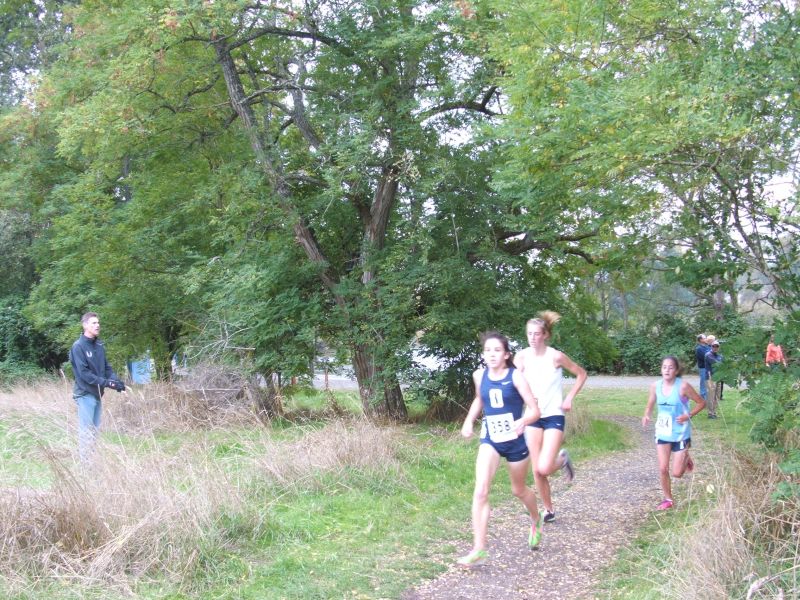 Alec Temple led the way in the guys’ race and the Capital runner finished well ahead of the rest of the filed with his 16:19 clocking.   Sawyer Hardback of Timberline garnered second in 16:53, as he nipped Ben Monk of the winners.   Kaleb Javier led his Wilson team mate Tanner Paschich by seven seconds with his mark of 17:04.