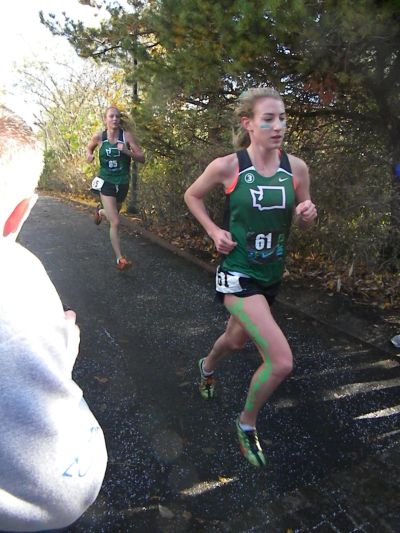 It was a relatively quiet week in the Northwest and the nation at large with Alaska & Idaho runners idle and most from the state s of Oregon & Washington as well.  For a lucky few the annual Border Clash allowed the opportunity to strut their stuff in a lower key affair than is usual at this point of the season.  For many the race was for fun, yet you would never know it after watching the races.

Icy conditions made certain parts of the course a bit slippery, yet Nathan Weitz, Anthony Armstrong and Izaic Yorks remained a trio for the entire race, as they pushed the pace.  Most of the work up front was handled by Shadle Park’s Weitz and, although there was a small pack around the trio early, the race soon boiled down to a private battle, which in some ways was a bit of a rerun of their 3A State meet.  All three ended up holding the lead at one time or another but I the end it was Kamiakin’s Armstrong, who earned the victory.  Izaic Yorks claimed second and Nathan Weitz was right behind in third.  Santos Vargas of Eisenhower placed fourth in 14:00 and was part of a large phalanx of Washington runners, who dominated the top thirteen places.  Travis Neuman of Summit placed ninth to top Oregon runners & Jackson Baker of Franklin was the only other Oregonian to break into the top fourteen. 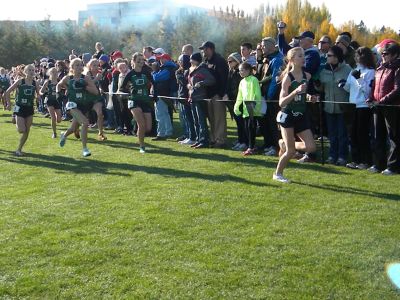 The girl’s race was compromised by a strange start, which impacted the race but one can not argue with the race that Katie Knight, who was challenged most of the race by Jordan McPhee of Mt. Rainier, ran in claiming the victory.   For Katie it was another quality victory, while Jordan McPhee proved that she belongs in the national rankings after her third place effort.    Amy-Eloise Neale did not have a good start due to difficulties but she threaded her way through the pack to earn second in 15:58.  Alexa Efraimson of Camas finished with a flurry to take fourth just ahead of Maddie Meyers and then Oregon 6A champion Sara Tsai followed as the first of the Oregon contingent.  Chandler Olson & Stephanie Rexus annexed the next two places before Erin Clark, Ashley Maton & Megan Fristoe secured ninth through eleventh respectively for Oregon.

With that race in the books there will be a demarcation point, as the most elite of runners head in opposite directions.   For some it will be the team race in the mud of Portland as the Summit and Glacier Peak girls and the North Central and Gig Harbor guys will take on the Saratoga & Fayetteville-Manlius national powers.    The top individuals will test themselves in the Foot Locker West Regionals in two weeks, although most of the nation (Northeast, Midwest & South) will qualify on super Saturday after Thanksgiving.   Whatever direction one heads – good luck!

This is traditionally the State’s most important meet, yet Fayetteville-Manlius once again passed it up to concentrate on other things.   Second-rated Saratoga Springs happily returned to Wappingers Falls to claim their third straight team title.    The Blue Streaks top runner was Taylor Driscoll, who ran 18:43 on the challenging course at Bowdoin Park.   Mary Cain of Bronxville won the race in a zippy 17:40, which is the third fastest time ever turned in on course.  Only 2011 Foot Locker champion Aisling Cuffe and Nicole Blood (graduate of Oregon) have run faster.   Laura Leff of West Genesee followed in 18:09 and Alexis Panisse of NYC earned third with 18:23.  Alexis will attempt to become the first PSAL girls’ qualifier since Nnenna Lynch in 1988.   Lauren Mullins of Johnson City took fourth in 18:23 &Rachel Paul of Sachem East was fifth in 18:37.   Shen’s Lizzie Predmore ran 18:47 to take eleventh.

Shaker annexed the boys’ team title but Brendan Smith of CBA (Syracuse) earned the individual accolades with his time of 15:58.   Dan Galford of Monsignor Farrell finished less than a second behind in second.   Third went to Thomas Awad of ever powerful Chaminade (Long Island), who ran 16:02, while Mike Libruk of Shaker (16:03) & Sam Anderson (16:06) placed 4th & 5th.

Megan Lacy continues to be hampered by a groin injury and on Saturday she was only able to place seventh.  Her time of 18:30 is well under the time she posted on Holmdel earlier this year, so her anticipated berth at Foot Locker Nationals is in jeopardy.  Stepping into the void was Holly Bischof of Bishop Eustace, who ran 18:13.   Caroline Kellner ran 18:20 for second and Mackenzie Barry placed third with 18:21.   Marisa Ruskin was fourth with 18:23 – two seconds ahead of Kristen Taub of Eastern Christian.  Dana Giordano of Bernards finished sixth with 18:26.

There were no surprises in the boys’ race with Tim Ball of Piscataway leading the way with 15:31.  George Kelly of CBA followed in second (15:37), as anticipated.  Third went to Ben Malone in 15:40 and Tyler Gibbons ran 15:44.   Shawn Wilson of Cherokee ran 15:45 to finish ahead of Stephen Lewandowski, who ran 15:47.  Blake Udland came in seventh in 15:51 edging Jack Leahy of Westfield.

This meet, whose first champions were Bob Kennedy & Laurie Gomez-Henes 25th years ago, takes place in Kettering, Ohio every year.   This year it including All-Star teams from Ohio, Indiana, Illinois & Michigan, although it has in the past also included Pennsylvania & Kentucky.   Ariel Michalek of Illinois won the girls’ individual title with 18:37 to earn a 14 victory over Michigan’s Rachel Schulist.   Ohioan Kayla Scott claimed third in 18:59 & Renee Wellman of Indiana was fourth with 19:04.   Illinois runners Kayla Spencer & Chelsea Blaase took 5th & 6th.     The Indiana girls edged Illinois in the team scoring, while the Ohio guys took the measure of their counterparts.

Patrick Niyork of Illinois led the way for the guys with 15:49 and Ohio’s Adrian Ross edged Nicholas Soter of Michigan for second, as both were credited with 15:53.   Evan Chiplock of Saginaw claimed fourth, also in 15:53, while Ryan Polman ran 15:54.   Sixth went to Nick Pupino of Ohio with 15:56.  Ohio runners Ryan Roush & Tony Hawkins swept the next two places as well.

They returned to Franklin Park once again and Catarina Rocha’s time of 18:12 easily earned the victory over Camille Blackman (18:41) & Maggie Mullins (18:45).   Jordan O’Dea ran 18:34 to win the other division.   Bishop Feehan won the team race for the guys but the individual title came down to a kick, which was won by Wesley Gallagher, who ran 15:43, over Stephen Robertson, who followed a second later.   Scott Carpenter took third with 15:52.  Jonathan Green won the other division with 15:40 over Joel Hubbard, who ran 15:41.  Colin Bennie took third with 15:45.

Florida is not known for its hills and the course at Little Everglades yielded some very fast times, especially for some of the girls.   Olivia Ortiz won the 3A race in the fastest time of the day with 17:39.  Lily Williams placed second nine seconds later in the division and Carly Thomas (17:53) & Nikita Shaw (17:53) were not far behind.   Shelby Davidson earned the 2A title in 17:55 topping Daesha Roberts, who ran 18:08.   Bridget Blake won the 4A title in 18:05 & Julie Williams took 1A with 18:18.

Battle of the Potomac

This race features teams from Virginia, Maryland and West Virginia and Eric Graf of WV won his second championship with his time of 16:28 on the Gaithersburg course, which hosted the USATF XC Championships three years ago.      Louis Colson of Virginia earned second with 16:45 and Evan Laratta of Maryland followed in third three seconds after him.  Evan Zemichael of Virginia garnered fourth with 16:59.

Bailey Kolonich secured the girls’ title with 19:56 defeating Maryland’s Charde Daley by twenty seconds.   Abbey Daley, also from Maryland, placed third with both girls being credited with times of 20:16.  Fourth went to Madeline Wittich of D.C. in 20:20 & Polly Terzian came in fifth.

The desert in Tempe, Arizona offered a chance for runners to qualify for a romp in the cold & mud of Portland and Erin Hooker of Colorado won first prize with a time of 17:36.   Summer Harper of Utah placed second   six seconds later and Rolonda Jumbo of Arizona finished third in 17:43.   It will be interesting to see what Jumbo will do given she has tried the previous three years to qualify for Foot Locker and narrowly missed as a freshman placing 12th.  Wings of America, who she runs for in the off season, has a fine history and tradition at Foot Locker, which makes it even more of a challenge for her.   Elise Cranny of Colorado ran 17:45 to take fourth and Sarah Feeny of Utah placed fifth with 17:46.  The top alternates were Regan Mullen of Colorado & Sarah Fakler of Arizona.

New Mexico’s Luis Martinez came home first in the guys’ race with a time of 15:08.   Danny Carney of Colorado ran 15:12 to take second and Clayton Young of Utah followed two seconds later.  Fourth went to Braydon McClelland of Utah, who ran 15:21 & Gus Waneka of Colorado came in with the same time in fifth.   Brad Nye ran 15:25 to become the first alternate & Jackson Morrison of New Mexico, who ran 15:28, was seventh. 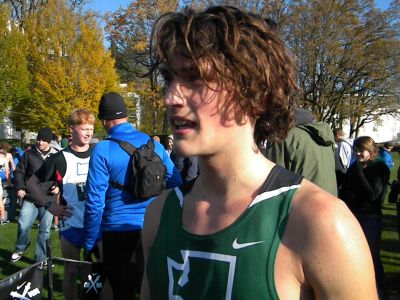 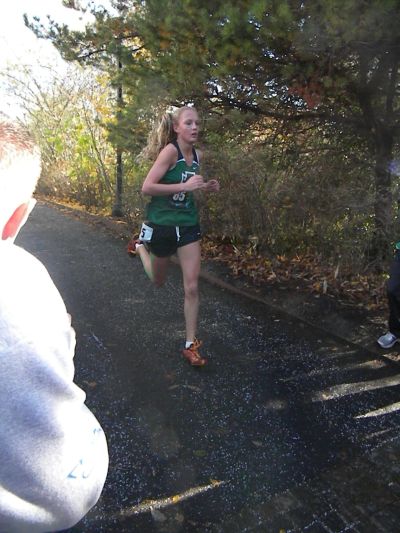