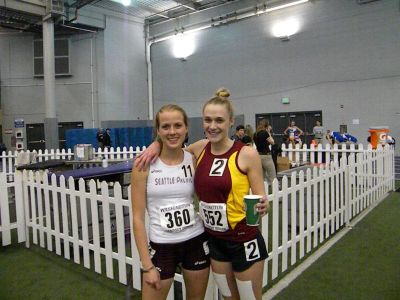 Saturday’s indoor track meet at the University of Washington’s Dempsey Center  meet mostly serves, as the beginning of the track campaign for collegiate runners, but it allowed a forum to a number of prep athletes as well.    Making the loudest statement of the high school stars, who wanted to get their seasons off to an earlier start, was Tera Nova of Montesano High School.   Novy,  the 2010 Washington 1A shot and discus champion topped all comers in the shot put with a heave of 48-08.75.   The senior represented Team Evolution in the meet and set a personal record, as she defeated a collegiate field:  not just for her flight but the entire meet.  Her toss appears to be a national best for 2012.   Also competing in the shot but in a different flight was Asianna Covington a prep from Vancouver, BC, who threw 38-11.50.  She was credited as exhibition, yet her throw was the second best with only one collegian topping her in the first flight.

Kristen Coffman of Tualatin High in Oregon won her heat of the 800 Meters, also facing collegians, in a time of 2:15.23.  It marks an auspicious start to her senior campaign, which will also see her compete in the high jump.   Kristen dueled with Janelle Everetts of Western Oregon before pulling away down the stretch.    Kristen ‘s time of 2:15 should put her in the top five American prep runners for this indoor season.

Brittany Gappa of Squalicum competed in the Mile as an unattached runner and placed second in her heat of thirteen collegiate runners.    Her time of 5:12.65 gives her a fine start to the new season.

Patrick Gibson, the Washington 2A Cross Country champion, placed eleventh in his heat of the 3K   The Squalicum runner also ran unattached against collegians.  His time for the event was 8:45.54. 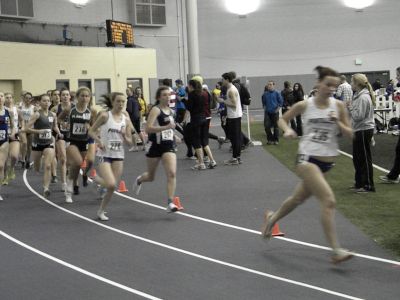 McGwire runs just behind Andrea Dettman of U Portland

Mary Kate McGwire of Dallas, Oregon is only a junior and Saturday marked her first effort on the ‘boards.’    A learning curve is always expected but Mary Kate made her first experience a memorable by placing 13th in her field of 22 runners.   As the others, she faced collegians and her placement in the field is only a part of the story, because she would have won the previous heat that had a total of 24 runners – all collegiate runners.   Her time of 10:37 was one that many of her elders would have love to clock. 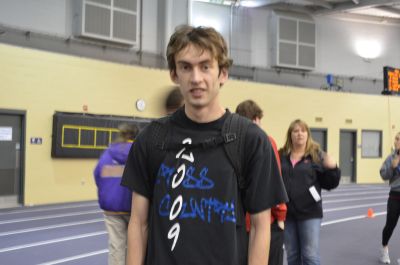 Will Drinkwater of Gig

Last fall the Gig Harbor Tides had an excellent cross country season, as they won the Washington 4A championship, as well as a berth in the Nike Team Nationals.    One of the team captains was Will Drinkwater, who had a long fall campaign, but was ready to start the track season on Saturday.  Will ran the mile in a time of 4:22.6 and placed sixth in his heat against older runners .

Kris Tollefson of West Seattle, running for the Seatown Express ran 8.23 to place third in her heat of the 60 Meter Dash.  Kris came back in the 200 Meters to earn second in her heat with a time of 28.06.

One other athlete may very well deserve credit and that is Constance Kuhnly of Todd Beamer.   Listed in heat one of the 200 was one Gail Kuhnly, who ran 28:57.   Given the time is one that can be expected of Constance & Gail ran unattached, the thought is that there was a typ. 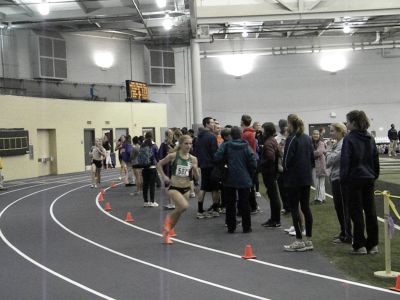 I would be remiss in failing to mention the feature event of the meet, which was the ‘hot’ heat of the 3K.  That event was claimed by Lisa Kohl Uhl in a time of 9:10.36.   Lisa is a former NCAA champion from Iowa.  She battled early in the race with Pam Johnson of Nike  and the pair went through the 1600 mark in 4:36.   Running laps of either 73 or 72 finally saw Lisa pulling away in the second half of the race.  Johnson was well ahead of the rest of the field with her time of 9:17.

The Dempsey was filled with runners and spectators and it would have been relatively easy to overlook one small lass, because of her diminutive nature.  That is she is easy to overlook in an older and taller crowd unless one paid attention to the long jump competition, where more than a few eyebrows were raised by Tierra Crockwell.  Certainly more than one college jumper gave her a stunned yet appreciative look after Tierra soared 15-00.50 to tie for tenth in her flight of jumpers.   The tiny Tierra is only ten years old yet the Junior Olympian was able to defeat a fair number of collegiate athletes on Saturday.    It may have only been the  Northwest’s first indoor meet of the year but the Preview offered something for everyone. 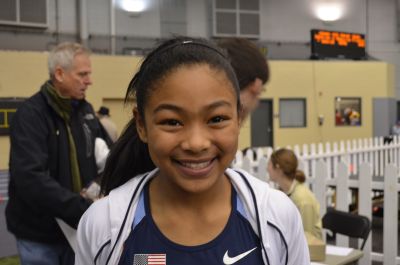