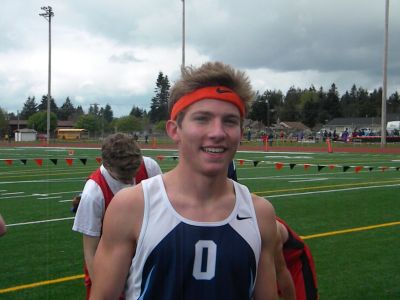 With a number of records going back to 1992 this meet has plenty of history but the young freshmen competing on Saturday did not have the advantage of reasonable weather.  Rain was once again part of the equation, although there were brief moments when the Sun made an appearance.   Still despite the inclement conditions a number of young athletes logged some solid performances.   James McClintock of Olympia ran a fine 400 Meters in 53.97 to top Tyrus Snow of & Trevor Davis, who were both from Tumwater and ran 54.   As solid as those times were, they did not threaten the mark set in 2011 by Tumwater’s Andrew Brown, who ran a sizzling 49.41.   BreAnna Ellis of North Thurston led the girls’ 400M with 62.40 with Kendra Jackson of Yelm earning second in 65.13.  Third went to Chisom Eke of Skyview, who ran 66.

Berhanie Knutzen of Tumwater took the lead early in the girls’ 1600M but Megan Condon of Skyview reeled her in gradually before pulling away to a comfortable victory in 5:25.56.  Bailey Birch of Ridgefield garnered second in 5:35, while Lauren Pierson of Capital, who was doubling back from the earlier 3200M, claimed third in 5:36.    Knutzen followed in 5:39 and Kim Farrar of Capital placed fifth in 5:43.   Danielle Won of Black Hills took sixth in 5:46 and was followed by Ali Weaver & Brooklyn Harper of Olympia, who both broke six minutes.  Just missing that mark were Anna Brooks of Northwest Christian Lacey and Caitlin Horrocks of Skyview.   Peter Kesting of Olympia ran away in the boys’ race and coasted home in a time of 4:33.65, as he geared up for District.  Kaden Harbertson of Skyline earned second in 4:41 with a second margin over Darius Burke of Shelton.      Riley Girt of Onalaska came in fourth with 451 and Bernardo Olivas of Shelton ran 4:54.  Justin Knowles of Skyview just missed breaking five minutes with his clocking of 5:00.93, while Levi Bisonn of Olympia & Sam Lomax of Central Catholic were just over with their marks of 5:02. 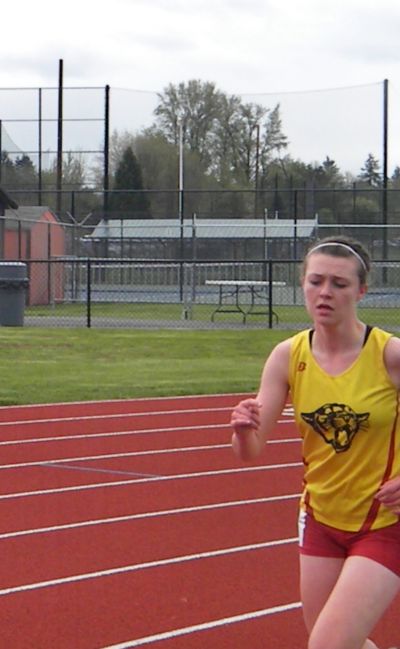 Lauren Pierson of Capital claimed the honors in the 3200 Meter Run with a dominant performance of 12:05, while Anna Brooks of NW Christian ran alone in second with a time of 12:29.  Daphne Peek of Elma secured third with 13:26.   The guys’ race at that distance was actually run later in the meet and was claimed by Gunnar Vik of Central Catholic, who ran 10:30.11.  Ben Gilvan Parke of Olympia was second in 10:36, while Riley Girt doubled back to take third in 10:44.  Riley McCammon of Central Catholic (10:46) and Ethan Bauer of Skyview finished 4th & 5th respectively. 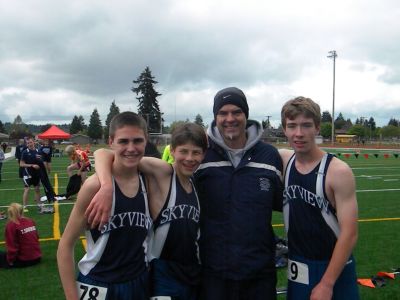 In the field, Peyton Fredrickson of Skyview topped the filed in the High Jump clearing 5-08, while Forrest Wallace of Toledo was second with 5-06.  Bethany Lipska of Elma was the best of the girls in that event with 5-00.   Bethany had a banner day winning the Long Jump in 14-07 and placing second in the Triple Jump (31-02) behind Julia Bennville’s 31-11, who scored for Ridgefield.   Kyra Lorch of Skyview was also a double winner taking the Shot Put with 29-01 and the Discus with 81-11.  The Javelin triumph went to Mecaela Chapman of Napavine with 103-05.  Michael Paulson of Shelton got the nod in the Shot Put 40-01 to 39-08 over Joseph Garrison of Skyview.   Charlie Dahlstrom of Gig Harbor scored in the Discus with 118-04 and Nathan Egglesten of Ridgefield topped a close quartet in the Javelin with a throw of 129-03.  Second went to Steve Bailey Robertson of Napavine with 126-04, while Steve Miskimens of Yelm (126-03) & Kyle Oman of Skyview (123-06) were close behind in third & fourth. 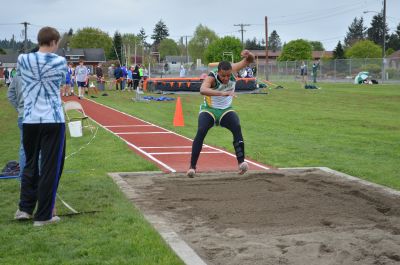