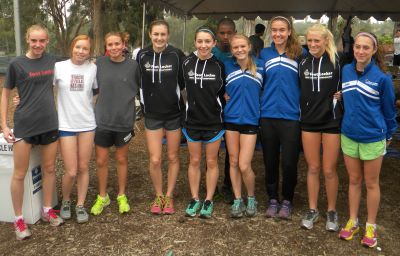 There was the option of a buffet breakfast for all, who wished to participate - and there were plenty
of takers during more than rwo hour period, which was available.   It left plenty of time to eat and
brouse the facilities but many runners broke into various small groups to interact.
Probably the main event of the day was the traditional walk-through and the runners boarded the
buses for Balboa Park.   Once there the Torres brothers led the way with the Midwest girls following
close behind - was in an omen of tomorrow's regional team race?   At any rate they entourage
including numerous parents & coaches made a one-lap tour of the two lap course.  It offered an
opportunity for everyone to try to determine where they would prefer to run but naturally the key was
a close-up look at famed Upas Hill.  Upas is not a truly demanding hill but it is of decent length and
it is reasonably steep.   The second portion of the hill is traveresed with with one hip moving above the
other a bit underneath, because it is run a bit on the side in stead of taking it head on during the last
portion.   Crucial also is the fact that Upas seems distinctly steeper the second time around and it
can also be a concern on the fairly steep decent.
They all practiced the routine for the introductions, which always is of interest.   Each runner was
introduced in reverse order of their finish in each reional event.   The only missing ingredients were the
listing of each runner's accomplishments, which always is impressive just to hear.  With that done each
runner was free to jog or run the course and most got in a bit of a run with some showing their issue
with nerves and running a surprisingly long time.  Then again every runner has a pretty decent idea of
what works best for them and it is not the be judged.
A quick jaunt on the bus and it was back to the Hotel Del Coronado, where the afternoon was free.
Some played table tennis, while others puttered with foosball.   There were even some takers for an old
arcade game like Ms. PacMan.   Of course with the many amenities of the Del each of the eighty
athletes could have chosen something different.
The early evening was centered upon the Pasta Puffet, which was held in the Empress Regent room
of the Grande Hall.  The hall is aptly named yet not as spectuclar as the Crown Room, wich hosted the
breeakfast.   That said most everything at the Del is elegant.   After the dinner athletes, parents, friends
& coaches had the chance to witness a panel discussion that included Ryan Hall and Meb Keflezighi
among others.  It is always a potent display for the young athletes to listen to their heroes and learn that
everyone is so very similar.   The only difference is in the stage of success.   We spoke with Poli
Baltazar, who made sure to speak on the side with the stars of Asics & the Foot Locker alumni.
With the runners having to get up early and the girls' race on Saturday beginning at 9:15 AM this was
the one night, where everyone wanted to get to bed and it was off to bed, well at least the room, by 9 PM.
In the end it was a full day with the main festivites awaiting tomorrow.   We'll report all the action
tomorrow.