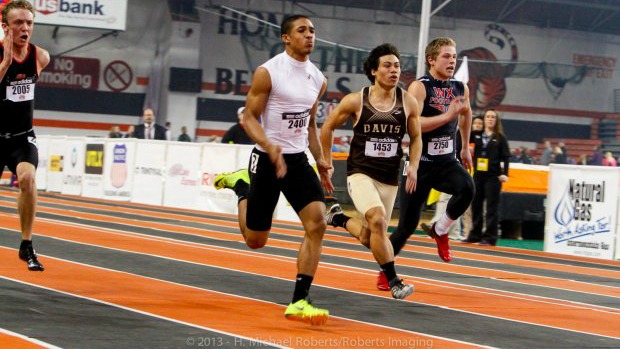 The Brooks PR Invitational brings together the nations top track and field athletes from across the country to compete at the Dempsey Center in Seattle, Washington, one of the fastest indoor tracks in the nation. The meet consists of seven events the 60 meter dash, 60 meter hurdles, 400 meter dash, 800 meter run, one mile run, and two mile run. The home sttuate is well represented sending the most of any state, 20 athletes to nearby Seattle. Leading up to the meet we will spotlight these talented runners.

Tatum Taylor started out 2012 in a photo finish of one of the most competitive meets in the country, the 2012 Brooks PR Invitational. The then junior at O'Dea High School battled it out with Levonte Whitfield of Florida and lost by the narrowest of margins finishing second in a personal best itme of 6.71.Taylor then went onto win the Washington State Meet in the 100 meter dash. He first blazed a 10.39 in the prelims in route to a finals time of 10.68. 2013 didn't start out exactly as Taylor had planned. It was interrupted by injury after the two sport star popped a tendon out of his place in his ankle during football season. It set him back three weeks and after letting it heal it flared back up again. The past two weeks he started back his training and looked to be close to full speed.  He recently opened his season at the SImplot Games and won the 60 meter title in a US#3 time of 6.73. Up next, another challenge against the nation's best right in his back yard. Taylor says it is a cahnce at redemption.

"For me I am most looking forward to all the completion I get to run against at Brooks. It will most likely be the fastest and best competition that I will see all season. My goal for this meet is to simply win. Ever since last year losing to Levonte Whitfield has bothered me. It was by far the closest ran I have ever been in loosing by four one thousandths of a second. If you want to be the best you have to beat the best."

After Brooks, Taylor, an Arizona State signee has more lofty goals. He hopes to finish in the top three in every event he does in the country and be an All-American like his father Joseph Buchanan.

Getting To Know Tatum Taylor

What are some un-running related things people might not know about you?
Some thing people might not know about me is that when I was 15 months old my mom took me to the doctors because she thought something was wrong with my legs and feet. They told her that my legs and feet were fine however because of the position my feet they told her " I will never be a Carl Lewis and be able to run fast."