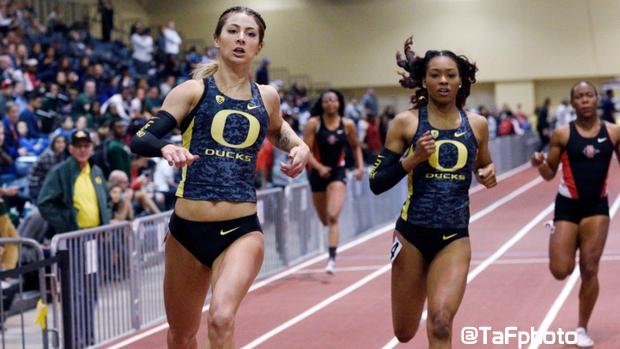 Story by Lincoln Shryack for FloTrack

The idea of "range" in track and field tends to bias in favor of distance events. And that makes sense theoretically -- the 1500/mile/3K/5K/10K are all substantially different events rarely mastered by one person.
But when someone does come around and is near his/her very best in all of those distances, we quickly recognize their greatness. Because elite mile speed and elite 10K strength are usually mutually exclusive.
But it's not unprecedented in collegiate circles. Versatile stars like that -- think American Jenny Simpson and Kenyan Lawi Lalang -- do seem to pop up ever so often. In the NCAA right now, the University of Oregon's Edward Cheserek is the undisputed king of range and probably the greatest college distance runner ever. His bag of tricks has made him a 15-time NCAA champion.
Still, what impresses most about King Ches --say, going scorched earth on the DMR after winning the 5K just minutes prior -- has been done before.
But what about the sprints? Does the fact that the 60m, 100m and 200m are all very short and seemingly similar races mean that less credit should be given to a master of all three?

The NCAA record books say no.

No man or woman is currently in the all-time top 10 in three separate individual flat sprint distances -- American hurdler Keni Harrison has all-time marks in the 60m, 100m, and 400m hurdles.
Meanwhile, distance stars Simpson (five events) and Lalang (four) have easily surpassed this criterium in their disciplines. This is not counting duplicate indoor/outdoor events, as Lalang is in the indoor and outdoor 5K top 10.

But in the NCAA history up to this point, sprinters haven't come close -- no one has more than two top 10 all-time marks between the 60m, 100m, 200m and 400m. Due to a much more limited selection of events to choose from, a propensity for top sprinters to turn pro early and an always crazy deep pool of talent to compete against, there is simply no historical NCAA comparison in the mold of a Simpson, Lalang or Cheserek in track's speediest events.

But that could soon change. The current collegiate king of range may just have to pass the versatility crown to a new queen -- Ches' Oregon teammate Hannah Cunliffe.
The latest Ducks sprint superstar has a skill set that we've never seen in collegiate history.
Last weekend in Albuquerque, New Mexico, the junior broke the all-conditions 60m NCAA record with her blistering 7.07. That's remarkable on its own, but Cunliffe isn't your typical elite 60m runner. She is now the only woman in NCAA history to run sub-7.10 and sub-11.00 in the 100m.
Oh, and she can run the 200m, too. Her 22.60 on February 11 is currently the fastest time in the world in 2017.


It's not a long list! Everyone on it has either won an Olympic or world title. This isn't to say that Cunliffe is the next Allyson Felix -- Cunliffe has yet to win an NCAA title -- but the tools are absolutely there to make her a superstar at the next level.

She was close to an NCAA title last year -- second in the 60m and third in the 200m indoors -- before a hamstring injury in the 100m prelims forced her to end her 2016 campaign. That's probably why she's been overshadowed thus far by teammates Ariana Washington -- 2016 100m and 200m NCAA champ -- and Deajah Stevens -- 2016 Olympic finalist 200m.
The Ducks are so good that someone of Cunliffe's ability can be underrated.

But she likely won't go home empty-handed again this year. And if she does in fact break through with a title, perhaps the uniqueness of her ability will be justifiably highlighted.