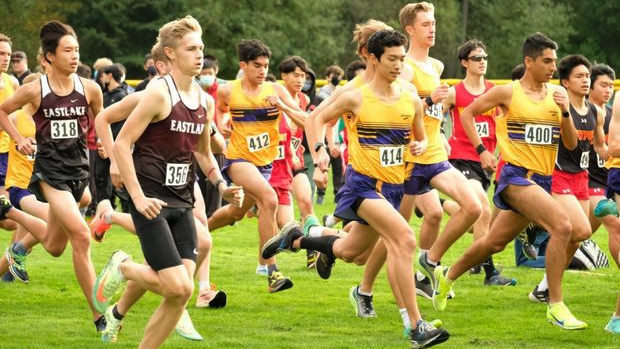 Ethan Pedersen (Eastlake) secured the win over Sam Jacobsen (Newport) with a time of 15:44.58. Jacobsen finished ahead of his teammate Oscar Pont  for second place, although their performances were not enough to lift their team over Issaquah.

Team champion for the boys was Issaquah High School narrowly edging out Newport (Bellevue) by two points! Contributing to the win was Issaquah's fourth and fifth runners Ben Konopka and freshman Connor Rickey. Konopka and Rickey finished together at 16:37 and placed just far enough ahead of Newport's fifth runner. Issaquah's 1-5 split was only 24 seconds!

On the girl's side, the race was dominated by young runners. Seven out of the top 10 girls were either freshmen or sophomores! Freshman Sydney Collier  (Skyline High School) ran away with this one with a time of 18:00.15. Collier was followed by her teammate Anna Callahan with a time of 18:20.51.

As for the team performances, Eastlake came away with the team win, scoring 43 points. Even with Collier and Callahan's 1-2 finish, it was not enough to put their team ahead of Eastlake. However, Eastlake will be returning four of their top five runners so definitely expect them to make another push for the team title next year.

On the boy's side it was a battle between seniors, as the top three spots were all claimed by senior runners. Ryan Koopman (Mercer Island High School) claimed the individual title with a time of 16:27.61. Right on his heels was Mark Stevenson (Liberty-Issaquah) with a time of 16:32.02.

Mercer Island High School easily took this one with a team score of 35. Led by three seniors, Mercer Island positioned themselves ahead of a young Juanita High School team. None of Juanita's top five runners are graduating this year so expect them to come back stronger next year.

Claiming the individual title was Hale Behan (Sammamish High School) with a time of 16:18.42. Behan took this win with a twenty second gap between him and second place, Kidus Kassa (Foster High School) who finished in 16:38.34. These two were over 90 seconds ahead of the rest of the field!

Similar to the individual results, Sammamish High School narrowly came out ahead of Foster High School by a 5 point margin! As Behan and Kassa were so far ahead of the field this really came down to the performances of their teammates.

For the individual girls, Myranda Moran (Renton High School) cruised to a victory over the rest of the field. Runner up to Moran was Lucy Stewart (Sammamish High School) finishing well ahead of third place with a time of 22:43.35, as she was the only one within sight of Moran.

Stewart's performance led the way for Sammamish High School to take the team win over Foster High School. Overall the field was young, as there was only one senior girl in the race. It will be interesting to see how teams develop in years to come!