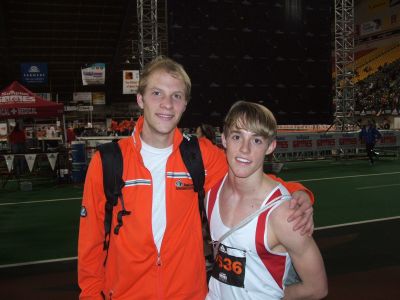 Thursday was a light day as far as finals went but both the men & women competed in finals in the wegiht throw. Josh Whitener won the men's event with a toss of 69-00, Chase Carroll placed second with 62-09, while jordan Pickerrel took third with 60-03. In the women's version Avana Story led the way with 58-00 and was followed closely by Monica Phillips, who went 57-10.75. Third place was claimed by Torie Owens with 55-04.50. The Javelin Throw - WST saw Stephen Smith easily triumph with 4708, while Nick Schneberger was second with 35-10. mike lacefield came in third with 31-08. Tiler Heiney topped the women in the javelin with a mark of 37-03. Emily Flynn claimed second with 34-10 in a very close competition for that place, as Samantha Baker (34-09) & Katya Peterson (34-08) were close behind her. This day also served as the qualifier into Saturday's distance finals. Although the point is to simply qualify a number of the heats proved to be quite interesting & even competitive but the men's 3200 offered something quite tantalizing for the winners each were clocked nearly the same time. Dallin Farnsworth, the two-time Idaho large-school champion, led most of the way in the first heat, although Ben Saarel the Wyoming XC champion closed late. Dallin's time was 9:32.57, which was stunningly close to the time of Elijah Armstrong, who ran 9:32.82. Armstrong is also a current idaho division champion, as well as a local runner, so their match-up on Saturday should be quite compelling. Saarel finished third with 9:33 and can be expected to be formidable as well. the fourth best qualifying time went to Brayden Cromar, who ran 9:36. Conner mantz & Zach perrin each ran 9:40, while Troy Fraley clocked 9:41. Adam Peterman placedd 8th in 9:42 & Noah Gade & Jerrel Mock rounded out the top ten. Natalie Shields & Summer Harper ran, as if their race was a final and their times ended up well ahead of the next qualifier. Natalie claimed the victory this day with a time of 11;08 to 11:10 for Harper. Kelsy Braithwaite, a Foot locker finalist from Utah, secured the next qualifying berth with a mark of 11:23. Sierra Manzer ran 11:28 for fourth & Abby Phillips had the fifth best overall time. Sarah Feeny (11:30) & Candace Greenwood (11:31) took sixth & seventh respectively, while Mikayla Malaspina, an idaho freshman, claimed eighth with 11:31. Paige Gilchrist & Jackie Heaps rounded out the top ten & Presli Hutchinson of Pocatello grabbed the final qualifier with a fourteenth place time of 11:46. Tabor Scholl, just a freshman, ran away from her competition to easily win her heat and also recorded the fastest time of the day with 5:08 in the 1600 Meters. Hannah McInturff gave the local fans something to cheer by easily winning her race with 5:14, although Kelley Robinson closed well to finish with 5:16. Sam McKinnon and Jamie Stokes battled in their heat but Sam earned the victory with the second-best time of the day of 5:14.33. Stokes was just behind in 5:14.85, which was good for fourth. The afore-mentioned Robinson hads the fifth overall time and Audra Destefano, who raced against McKinnon & Stokes, qualified sixth with 5:20, which allowed her to edge Mary jo Wright, who also ran a version of 5:20. Laura Young, Chiara Warner and Cheryn Trapp each qualified a second apart starting at 5:23 and Shannon Mahoney followed with 5:25 to earn the 11th qualifier. With 36 qualifying positions, like the girls' 1600M, time was not of the essence but Ricky Faure won his heat, which suffered two false starts, with 5:25. Brad Nye dominated his section with 4:28 and Isaac Faux had the third best time with 4:29.88. Brandon Yardley was only four-hundreths of a second off that mark and claimed fourth overall. Jake Heslington, Lucas Graham, Jordyn Asay & Joe maloney each ran 5:30, while Erik Harris was clocked in 4:31. Harris, who won the event last year ran well back of the leaders in his race early but moved up to third before easing back down the stretch. Kaden Clay, a local runner, placed sixteenth with 4:32 & Morgan Choate, also from Idaho, placed 29th with 4:36.