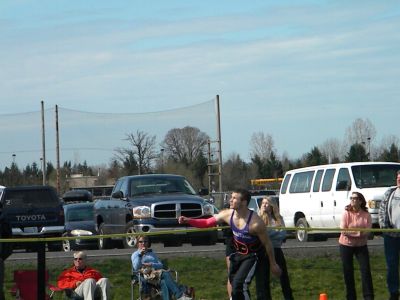 Blue skies and moderate temperatures blessed athlete efforts on Saturday and aided in the production of numerous records.   It seemed only fair after last year's Invite was plagued by cold temperatures plus rain and hail, which were all made more challenging by a brisk wind.  On Saturday there was only a modest breeze to effect events and record fell in numerous events.   So many records fell that it was almost hard to believe this was only the start of the track campaign and not a meet near the end.   Keller's mark had to be the most impressive, however, because he gave the State Record of 232 a challenge.

Johna McEllrath of Prairie set two new records by tossing the Discus 130-08 and the Shot Put 139-08.   Her effort in the Shot improved upon the mark of 139-08, which she set last year.   Kathran Dean of Mountain View also established two new records by winning the Long Jump in 17-7.25 and the Triple Jump in 134-10.  Tee Tee Martin ran 12.34 in the 100 Meter Dash to set a new standard in that event.   As noted Alexa Efraimson of Camas zipped through the 800 Meter Run in 2:17.52, which bettered Lynelle Decker's former mark of 2:18.84, which she set last spring.  The Camas star, who usually runs in the longer distances, had been ill earlier in the week, so her meet mileage was reduced but it did not seem to impact her effort on Saturday. 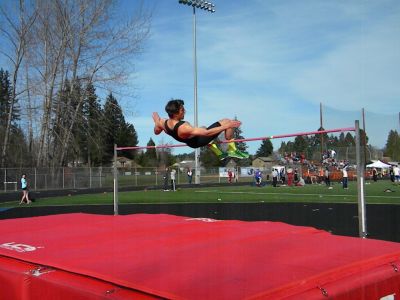 Jake Clizbe of Kalama performed his own rewrite in the guys' events by jumping 22-04 in the Long Jump and then tying the mark in the High Jump with 6-03.  That mark is especially impressive considering that Jake is only 5'7".   Jake also won the Triple jump (41-02).  Skyview's Jameson Shirley and Joe Thompson of Union both tied the Tiger Invitational Pole Vault record by clearing 14-00 but Shirley earned the victory with fewer misses.     The mark in the 300 Meter Hurdles was also revised, when  Jared Neiman of  Kalama went 40.67. 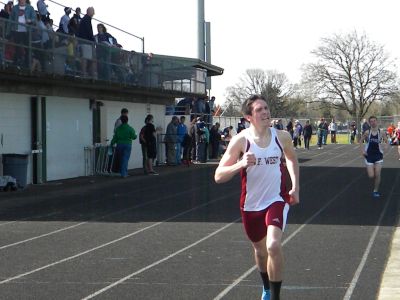 Dallas Snider of W F West broke his own meet record in the 1600 Meter run by triumphing with a fine 4:21.95 for this early season.  Also under the record was Colby Gilbert of Skyview, who ran 4:26.97.   It will be interesting to see what happens next year, because Snider and Gilbert are both only juniors as are the third,  fourth & fifth  place runners in the event (Tucker Boyd of Camas, Mavrick Knowles of Mark Morris & Blake Bussing, who is also from Morris.

These are but the highlights from Saturday's action & we'll go into more depth on Sunday.

Zack Marshall of Camas had a bountiful day scoring victories in both the 100 Meter Dash (11.15) & the 200 Meters (22.75).   E’Lon Mack followed Marshall with a second in the 100M & a third in the 200M, while Kevin Marshall of Skyview reversed places with Mack by earning second in the 200M & third in the 100M.   Of course nobody had as busy a day as Jake Clizbe, mentioned earlier, who took a break in the midst of the High Jump competition to claim a victory in the Triple Jump 41-02.  Daniel Duong of Battle Ground & Jameson Shirley of Skyview both topped 40-09, as they  secured second & third in the TJ.   Clizbe won the Long Jump with 22-04 earlier in the day, while Jessie Zalk of Prairie, Ryker Gilbert of Mountain View and Josh Ryan of Camas placed second through fourth respectively with leaps past 20-00.

The Shot Put competition was hotly contested & narrowly won by Zack Lacey of Woodland, who went 48-11.  Mitch Moe of Long was just behind with 48-09, while Triton Pitassi of Camas, William Lopez of Skyview & Richard Carter of Hudson Bay all topped 47.     Lacey also scored in the Discus (145-06) but Scott Feather of Camas was right behind with 144-01.   Mitch Moe was third.   Inadvertently overlooked previously was the fine day of Jared Neiman of Kalama, who won both hurdles events.  His mark of 40.67 set a new record in the 300H (the old record was 41.90).   Jared also placed second in the 100M behind Battle Ground’s Jake Blackman, who went 15.06, while Neiman was clocked in 15.32.      Garret Balthazar of Prairie triumphed in the 400 meter Run by edging Te’Kwon Wallace of Evergreen & Austin Johnson of Kalama.  All three runners ran 51 & change.

Tee Tee Martin not only was successful in the 100 Meter Dash and she added a victory in the 200M with 26.32.   Madison Lanford of Skyview (26.78) & Raigan Page Ridgefield placed 2nd & 3rd respectively.   Union’s Kaitlyn McKinney scored in the 400 Meters with a clocking of 61.08, which saw her nip Raegan Nelson of W F West, who ran 61.85.   Anh Thi of Evergreen and Andrea Olstead of Battle Ground were right behind with times of 62.  Madison Lanford fared even better in the 300 Meter hurdles than she did in the 200M, as she came home first with 46.12.   Kimi Knight of Camas was the winner in the shorter version of the hurdles with her time of 16.44. 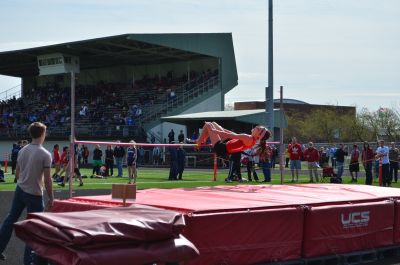 Laura Neff of Camas dealt with the breeze and the competition in the High Jump to secure a victory with a mark of 5-02.  Jordyn Montero & Heather Browning of Union both cleared 5-01 with Montero taking second with fewer misses.   Angelique Williams of Union led the way in the Javelin with her mark of 131-11 but Johna McEllrath of Prairie contributed more points to the Prairie cause with a second place effort of 116-00.   The Pole Vault title went to Jolee Melink of Long, who went 8-06. 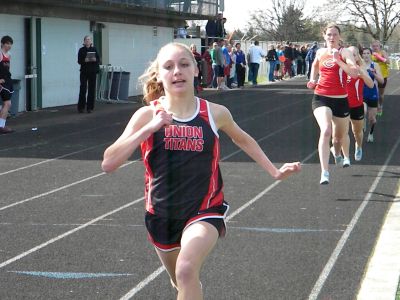 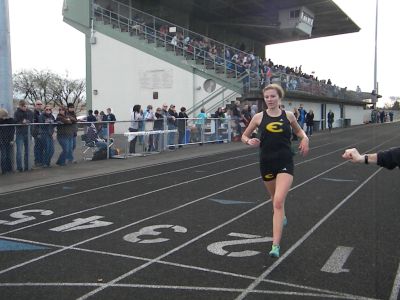 Sabrina Sears of Evergreen ran the better part of the race alone to finish second in 11:40, while Erin Russell of Prairie pulled away from Katie Hendricks of Skyview to garner third in 11:49.   Abby Knight of Heritage (12:06) and Lindsay Wourms of Camas (12:09) earned fifth and sixth, while Jadyn Gourley of Hockinson ran 12:18 to take seventh. 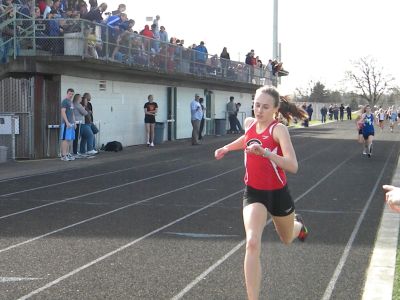 Alexa Efraimson made her track debut with an impressive 800 Meter run.  She went out somewhat conservatively and was shadowed after the first 400 Meters by defending champion Lynelle Decker of Mountain View as well as Austin Reiter of Camas & Rashelle Fisher of W F West.   Thereafter she opened up and scored convincingly with her record of 2:17.52.  Lynelle Decker placed second with 2:22 edging Reiter, who also had 2:22.  Fisher followed the duo in fourth.   The young men’s version of the 800 saw Tanner Sork o Union race away from his competition on way to a facile victory in a solid 1:57.   Danny Robertson of West & Tucker Boyd of Camas placed second and third. 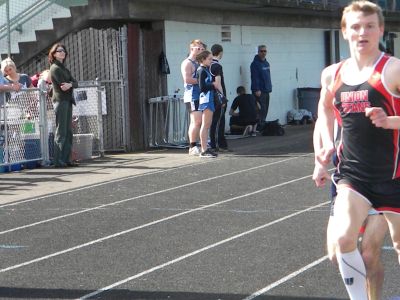 Dallas Snider of W F West was the defending champion in the 1600 Meter Run as well as the meet record-holder and he left no doubt about his intentions to win again.  He ran a first 400M in 71 and opened a good fifteen meter gap on his rivals.   Colby Gilbert of Skyview, who would be doubling back later in the 3200M, ran defensively early but then made a long move at the half-way point.  Colby made up a fair amount of ground forcing Snider to clock 63 for the final lap and both runners went under the old mark.  Snider improved his record by five seconds, as Colby ran 4:26.57.   Roman Kirkov of Union was in the hunt early but is suffering from “runner’s knee” (chondromalacia) and was forced to drop out - we wish him a speedy recovery.   Tucker Boyd of Camas finished third with 4:32 & Mavrick Knowles of Morris edged Blake Bussing for fourth. 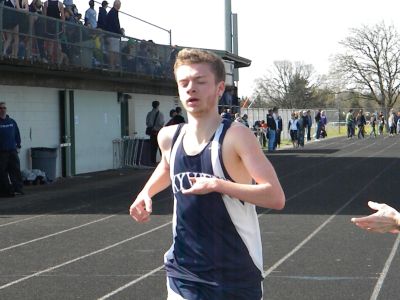 Last spring Colby Gilbert waged a stirring duel with Dakota Parker in the 3200 Meter, which resulted in a somewhat controversial decision at the line, as Parker was credited with the victory and the course record.   Although Colby trailed through the first two laps (the first of which went in a speedy 71), he made sure there would be no last minute surprises as he rolled through splits of 2:35 & 3:36.  He was comfortably in the lead at the half-way mark at 4:46 and from then on it was only a question of whether he could establish a new record.  That part will have to wait until next year but he made it close with a clocking of 9:39.  Mark Tedder finished alone in 11:46, which gave the Battle Ground runner a seven second margin over Tucker Boyd of Camas.  Andrew Duffy followed in fourth (9:54) ahead of his Camas team mate Andrew Kaler, who ran 9:55.  Jay Mason of BG and Mavrick Knowles earned fifth & sixth. 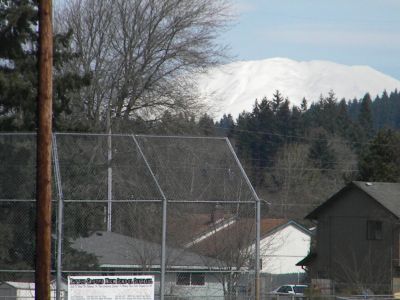