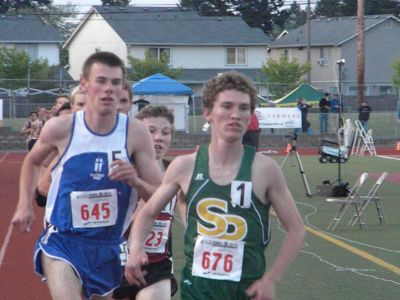 Washington has become the premier state for distance running.   It is that simple.   There has been a great deal said about the Renaissance in American distance running but the epi-center of that resurgence is in the state of Washington and, if there might be anyone, who might wish to argue that statement, they only needed to be on hand today at the meet held in Tacoma.  There were six distance races at 3200 Meters and each race was of the highest quality.  From 2A to 4A, whether for the guys or the girls a legion of runners gave evidence to the over-whelming quality of this relatively small state in terms of population with a preponderance of distance talent.  And importantly it was not just the vaunted Spokane area, which has long been recognized for its contribution to America's distance pool.  Seemingly every area contributed to an evening of running brilliance.


Of course the proof is in the proverbial pudding and like the old detective story used to say:  "just the facts" and to that point we begin to elucidate.  The problem is not in the detail for this writer, it is determining where to begin.  This was such a full evening of running but we'll start the way the runners did with the 2A girls' race.   Marina Roberts of Kingston is a runner true running fans can appreciate, because she is not afraid to set the pace and once again she took the point.   Marina bravely cut into the breeze early and in no time had whittled the challengers down to just two runners:   Sanne Holland of Cheney and Brittany Gappa of Squalicum.   With Roberts dutifully leading the way the trio distanced themselves from the rest of the field but the real action began late, when Gappa made her move.  Holland followed suite and with two laps to go they parted company with the valiant Roberts.  In the end it was Holland, who pulled away to win in a time of 10:48.40.  Properly setting the tone for the night Sanne broke the old record held by Shannon Porter in 2007 of 10:50.  Gappa earned second in 10:51:   a time which normally could be expected to win.  Roberts bravely held on for third with a mark of 11:03, while Lauryn Wate of White River closed well to take fourth in 11:06. Sehome's freshman Emily Pettis led the parade of runners, who would soon  sweep across the finish line with her mark of 11:12 and was followed by Nikita Waghani of Interlake and Sarah Reiter of Lindbergh, who rounded  out the top seven. 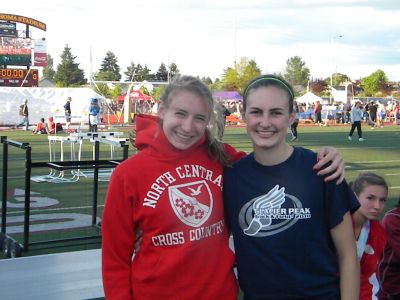 It was such a night that Steve Prefontaine's old room mate Pat Tyson stood on the sidelines and proudly noted that "I'm proud to be a Washingtonian."   Those Cascade mountains looming in the distance are volcanic but on this day in may the eruption was on the track and we hope it continues its tectonic shift in distance towards the Northwest.  With the racing such as it was it is almost stunning to note, that not all of the premier athletes toed the line on Thursday, as Alexa Efraimson and Amy-Eloise Neale for the girls and Izaic Yorks & Nicholas Boersmaof Wenatchee for the guys, just to name four runners, chose not to compete.  More importantly this was just the 3200 Meters:  the 1600 Meters is yet to come and there is also the 800 meters too.  We spoke with some of the competitors, who gleeflully gushed that they need not go to new York for a 'Dream Mile' but  we can have it here.  Stay tuned to the action on Saturday.  It might be epic! 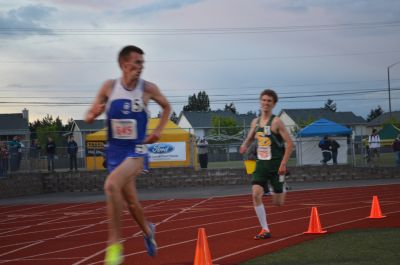