It was a rather unique day in some ways at the track at Lewis & Clark College, where the Oregon – Washington Border Duel took place.   First of all the meet was expanded to allow athletes from Idaho & Montana to take place.

Secondly the attention was a bit split between some impressive prep talent in Portland & the world class talent at the Prefontaine Classic, as regular reports from Eugene seemed to flow in periodically. Of course those, who enjoy female running talent, had much more to see in Portland.   The weather was not fully cooperative, as it was a bit too warm for the liking of many distance runners, while too cool for many sprinters.  The sky was overcast, which was good for the distance people but it let loose for the girls’ shot putters, which was hardly helpful.  Still despite the full cooperation of the weatherman it proceeded to rain records as well.

The most anticipated event was left for last at least on the schedule and it did not disappoint.  Marcus Dickson of White River came in with one of the leading times in the nation with a goal of improving his best time in the 800 and he accomplished his goal.  The final result, however, was a bit of a surprise.  As is his wont Marcus boldly took the lead making sure that the pace would give him a reasonable shot at his goal.  He stormed through the first lap in 53 seconds yet looming just behind was Tanner Sork of Union (Washington) High School.  Sork, who had run 48.03 at the State meet last week, remained in striking distance throughout the final lap and as they hit the stretch, Marcus knew he was in trouble.  Dickson drove off the turn but Sork drew even and then edged ahead a bit before the finish.  Sork crossed the finish line with a stunning 1:4874:  a meet, stadium and, I believe, a State record.  Dickson earned a PR with his second place effort of 1:49.33. 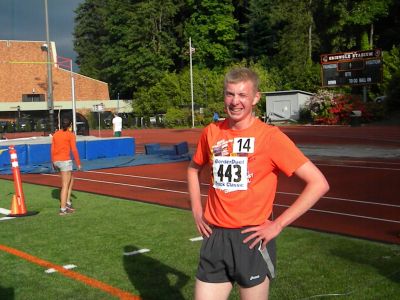 So swift were the leaders that there was a significant gap before Hap Emmons of King’s & Drew Schreiber of Eisenhower followed them home in spite of running fine times of 1:53.50 & 1:54.80.   Jordon Wallin, a sophomore from Rocky Mountain HS in Idaho, garnered fifth in 1:55.13.  Wallin had placed second in his state meet and on Saturday he edged Will Drinkwater of Gig harbor.

The aftermath of the race has to make one wonder for Dickson was coming off a very difficult quadruple effort in his State meet, where he ran the 800M, 1600M, 3200M & the 4 by 400 Relay.  That effort had to take its toll, although this is not meant to denigrate a brilliant and gutsy effort by Tanner Sork, who certainly proved his mettle on Saturday.  The other question remaining is how Seaside’s Brett Willyard would have run, if he had been in the field.  We were stunned to see him in an earlier heat, which he dominated with the third best time of the day of 1:52.88.  Willyard, who has had a break-out season, certainly would have made things more interesting. 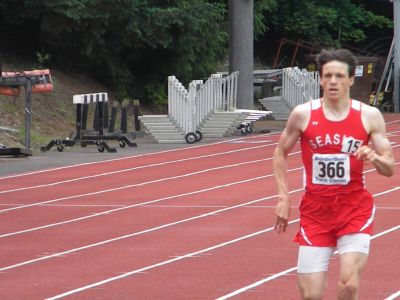 Although it did not quite produce a stadium record the girls’ 800 Meter Run certainly came close, as South Eugene’s Sara Tsai battled with Washington State champion Summer Hansen from Interlake.  The two dueled the entire way with Tsai coming out on top in 2:12.89, which was a meet record.  Hanson finished in 2:13.30 and Brigid Behrens of Corvallis earned third with 2:14.  The field was large enough, that it was broken into two heats, and South Eugene’s Erin Clark handled the bulk of the pace-making duties before Malika Waschmann of Corvallis caught her in the stretch.  The pair had the 4th & 5th best times with 2:14.04 & 2:15.44.  Morgan Anderson of Silverton claimed sixth, third in the heat, with 2:15.65. 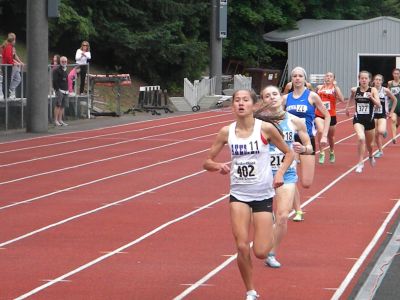 It was a banner day for the Axemen corps with Eugene State champion (800M) running in her first steeplechase and winning the 2K event in 6:57.89 -  a time well under the meet record. Paige’s time moved her to fourth in the nation.  Also under the meet record was Reagan Colyer of North Kitsap, who also went under the meet record with 7:07.24.  Leanne Asper of Lake City, the Idaho 5A 800 champion, was third.  Colyer led through the early laps before Paige took control of the race but Reagan was victorious in the 300 Meter Hurdles with her record time of 43.56.  Claire Thomas of Molalla placed second in that event with 44.09, which also was under the old record. 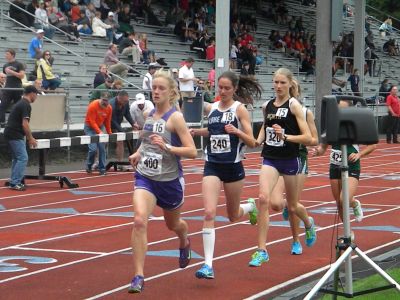 Records fell in the Field events as well as Washington State champion Sean Keller improved on his standard in the Javelin with his throw of 213-09.  Keller, who has had a busy season, will take a break before heading to Indiana for the US Junior meet.  Aaron Castle of Newport (Wa.) surpassed Ryan Crouser ’s meet record with his heave of 62-07. It has been a challenging season for Castle, who hurt his wrist earlier in the season and was forced to throw with his left hand for a couple of meets, but he’s recovered enough to be a formidable performer once again.  Second in the event went to Janek Jensen of Squalicum, who threw 52-05. 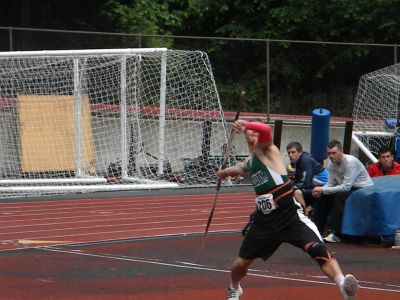 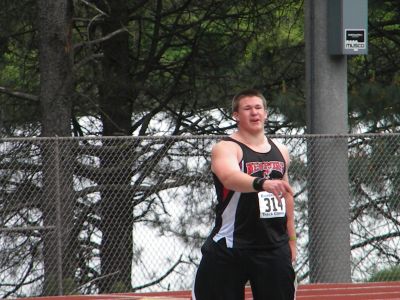 Tera Novy of Montesano broke the record in the Discus with 153-10 topping a strong field that included Ariel Oliver of McMinnville (143-07) & Gina Flint of Squalicum (142-11).  Emmi Collier made the most of her final throw in the Shot Put to surpass Tera Novy 45-06 to 45-01.  Both were tantalizingly close to the mark established last year of 45-10 by Novy.  Castle became a double winner by adding the Discus to his victory medal collection with his mark of 165-00, while Adam Lewig of Rocky Mountain (Idaho) took second with 159-08.  Rounding up the throwing events Kacie Hargett of Newport won the Javelin with 126-03.

Eisenhower’s Santos Vargas kept the record parade going with his clocking of 6:01.06 in the Steeplechase.  He and Joe Holvey pulled away from the pack early and raced side-by-side during the early portion of the race but Holvey made a move to capture the race with three-hundred meters to go.  He opened up a gap of ten meters and seemed on his way to victory until Vargas roared back in the final straight.  There was little to separate the pair at the end with Holvey finishing off to Vargas’ side in 6:01.45.  Joel Estelle of Lewis & Clark secured second with a time of 6:10 & Isaac Stinchfield of Washougal was fourth in 6:18.  Christopher Fisher of White River & Zach Holloway of Central Linn followed in fifth & sixth.

The 5K had not been run in previous editions of the meets, so the day’s winner was a record-setter by definition.  The record went to Nick Obletz of Oregon Episcopal but not without a great battle with Jackson Baker of Franklin.  The event was compromised a bit by the laps being incorrectly called, so each runner was not sure when they would finish.  With that Obletz drove a bit harder to the finish to edge Baker 15:32.05 to 15:32.77.  Zach Holloway, who ran by himself for most of the race in a sort of no-man’s land, finished in a fine 15:45 and Keegan Symmes of Skyline & Matthew Maton of Summit followed in 4th & 5th respectively.

For some runners a final time is even more important than a victory, so Brian Eimstad of South Eugene was a bit disappointed to finish in 8:41.16 – just two seconds off his personal best.  Still, his clocking gave him an eleven second margin over his closest competitor, who was Stephen Bottoms of Onalaska.  Third in the race was Travis Downen of Lindbergh, who ran 8:58 and finished ahead of his teammate Mohamed Abdi.

The 1500M for guys was as wide open an affair as could be dreamed with only eleven seconds difference between the first & tenth runner.  White River’s Kody Gould led for two of the laps but the horde, that followed, remained close behind throughout the race.  In the end Idaho‘s Wyatt Didrickson, who placed third in  his State meet, claimed victory in 4:00.55 – just missing the record of Izaic Yorks of 4:00.10.  Wilsonville’s Akiharu Kitigawa earned second in 4:01 & Fletcher Hazlehurst of Franklin was third with 4:02.  The valiant Gould took fourth in 4:03.40 edging Patrick McDermott of Ingraham.  Brad Rich of White Salmon, Adrian Hinkle of Cleveland, Sumner Goodwin of Lewis & Clark, Travis Henley of Wright & Trevor Lane of Southwest all ran versions of 4:04, while Alec Smith just missed with his 11th place mark of 4:05.05.

Shannon Susbauer of Milwaukie, the Oregon 5A champion in the 3K, who also placed second in the 1500 Meters last week, led for the better part of the pack through a 74 second first lap and continued as the titular leader through 800M in 2:28.  Katia Matora followed closely behind at that point with Sabrina Sears of Evergreen in third.  Sears made a nice move coming off the turn and pulled away to a victory with a time of 4:38.  Susbauer followed with 4:40, almost the same time she ran at State, and Katia Matora was third with 4:41.  Emma Wren of Cleveland garnered fourth in 4:45 and Charlie Davidson of Scappoose ran 4:46.

Tahoma ‘s Delaney Tiernan and Camille Parsons of Camas remained together most of the way with Tiernan squeaking out in 10:24.76 to win by less than a second.  Phacelia Cramer of South Eugene won her private battle with Lindsay Worms of Camas, as both runners finished with 10:34.  Kelsey Hilsenteger of Putnam ran 11:51 placing fifth & was the last runner under eleven minutes.

Rachel Proteau of West Albany last spring and she made it two years in a row with her solid mark of 5-06.  Katelyn Zabriskie of Idaho Falls cleared 5-05 to take second on misses, as Katie Evens of South Eugene & Sydney Eaton  of Wilsonville claimed third & fourth – also with 5-05.  Kaylin Lee of Canyon Ridge led the way in the Triple Jump and Claire Thomas  of Molalla topped the field in the Long Jump with 18—00.75.  Although she was quite close to the record of 18-02.25, she was not far ahead of runner-up Cambrie Harbaugh of Mountain View, who went 17-10.  Four vaulters made things interesting in that event and none were too far from the record of 12-05 at the end but the victory went to Anandae Clark of Lakeside with 12-03.  Washington State champion Jennifer DeBellis placed second in the jump-off with 12-03.  Allison Jeffries of Eagle edged Kirsten Webber in yet another jump-off to take third with 11-09.

In other boys’ Field Events Tristan Anastas of Wilson & Dakarai Hightower of Curtis soared 6-08 in the High Jump with Tristan getting the nod with fewer misses.  Both leapers had solid efforts at 6-10.  Three vaulters cleared fifteen in that event with two others making successful attempts at 14-09.  Joe Thompson of Union topped all-comers with his mark of 15-09, while Austin Sodorff of Woodinville took second on missed verses Payton Lewis, as each cleared 15-03.  Nathan Dumford of Mt. Baker & Jameson earned fourth & fifth respectively.

When the dust cleared in the boys’ Long Jump there wasn’t much separating the top four but Liam Henshaw of Marist scored the top placement with his 21-01.50.  Nathaniel VanTuinen of Riverside Christian & Payton Lewis of Rocky Mountain each went 21-00.5 with the former getting second and David Harris of Westside Christian was fourth with 20-11.

There were impressive times in the 400 Meters with four guys running versions of 48 & change, while Josh Wallin of Rocky Mountain just missed for sixth with 49.75.  Drew Mathews of Skyline’s 48.20 was not far off of the record, while David Harris placed 2nd with 48.62.  Third through fifth went to Alec Smith of Westview, James Heckendorn of Eagle and Andrew Brown of Tumwater taking third through fifth.   Leanne Asper of Lake City ran 56.96 to lead the girls in the one-lap event, while Reigan Page of Ridgefield (57.62) and Alexis Fesenbek of Olympia (57.95) came in third.