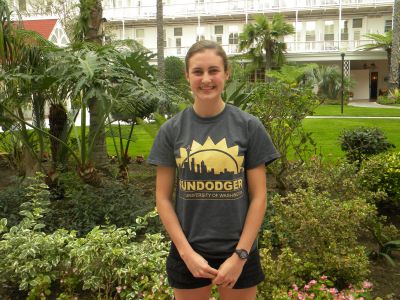 Prep harriers from around the nation arrived during the course of the morning and afternoon on
Thursday.   Many of the West representatives like Patrick Gibson, Poli Baltazar and Katie
Bianchini of Washington reached San Diego about 9 AM, while a flight from Chicago carrying a
fair number of Midwest runners, Anna Rohrer & Kaylee Flanagan among them, arrived a bit before
11 AM.  From the Lindbergh International Airport it was a short bus ride, provided by Foot Locker,
to the fabulous Hotel Del Coronado.   Of special note it was not just the young athletes, who were
ferried to the hotel but parents as well.
Aside from the usual first orfer of business of securing a romm & stashing your belongs, the first
order of business was to pick up their Foot Locker gear.  It was like an early Christmas to those,
who had earned the trip here, and everyone was able to pick up shoes, regional uniform (Shirt &
shorts) plus a variety of sweatshirts, hats and whatever.   The runners carried away so much in
terms of goods that one runner quipped that he'll now be over his two bag limit with the airline. Foot
Locker treats their young stars very well. 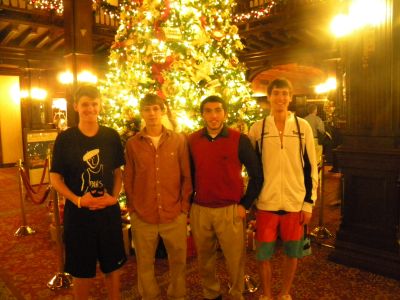 at the Del Christmas tree


The bulk of the day was open to one's disgression from a tour of the magnifiscent landmark hotel,
to a stroll down the beach and, naturally getting to know their peers.   Each runner rooms with
another from another region so for example Katie Bianchini of Washington was paired with Courtney
Ackerman of Illinois.   There was ample time to get acquainted and even compare notes about how
they all managed to get to this point.   This is a great learning experience on many levels.  The Hotel
Del Coronado offers many amenities including a skating rink, which is off limits to runners until after
the race Saturday, a pool plus a hot tub and there is naturally the Del itself, which displays its own
storied past and is rumored to have in its own resident ghost.  She failed to make an appearance,
however.  Still the was much to avail oneself and there was a display of a number of eagles, whose
mere presence discouraged the seagulls to make an appearance.
If the Del did not have enough to offer the Foor Locker people had prepared a game room, which
included ping pong & videa game.   For those so inclined there was also a library of videos of former
Foot locker races, which certainly was popular.   The afternoon was essentially free but there was
an organized fun run at 3 PM, which was led by former Foot Locker stars Ed & Jorge Torres.  Foot
Locker past is never far from Foot locker present and their was a nice group of runners, who took
a liesurely crouse through the area.
Evening was occupied by a low-key dinner, which was fitting for a first true get-together.   After
everyone had their fill there was a session, which allowed everyone to make their own tie-died
T-shirts:   By 8:30 or so everyone was left to decide how they might wind down an ideal day, as
everyone mentally prepared for the first view of the course tomorrow morning.   The temperature was
still quite pleasant even after dark, so even a stroll along the crashing surf was a pleasant option.

The Foot locker experience is so compelling that even Grace Tinkey has returned.  Grace would
have likely been one of the relatively rare four-time qualifiers to the event.  Unfortunately injury
interferred but there was Grace sharing conversation on the deck of the Hotel Del with
Sophie Chase, Allie Klimkiewicz & Caroline Alcorta of Virginia and karis Jochen of Texas.  With the
surf pounding in the neardistance it will be a lasting picture and a memory of yet another aspect of
what Foot Locker is all about and Grace did this on her own.  We will miss her Saturday yet thrilled
that she is again part of this special event and tradition.
We managed to chat with quite a few of the runners and the overall feeling is one of wonder and
pure joy.   There is nothing better in running, nor even close for that matter, and it is simply accepted.
For the moment there is not even a great deal of concern over the coming race - save for to savor the
chance to run against an elite field on a classic course.   More from running Mecca tomorrow and
another look at the Foot Locker experience. 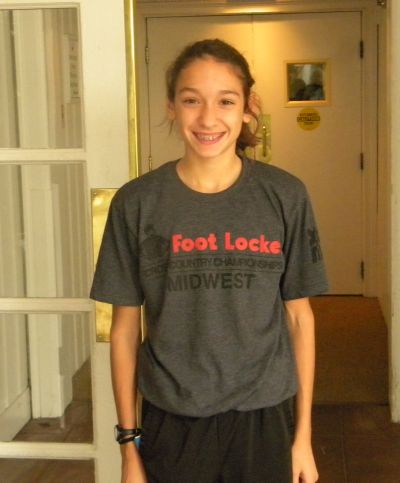