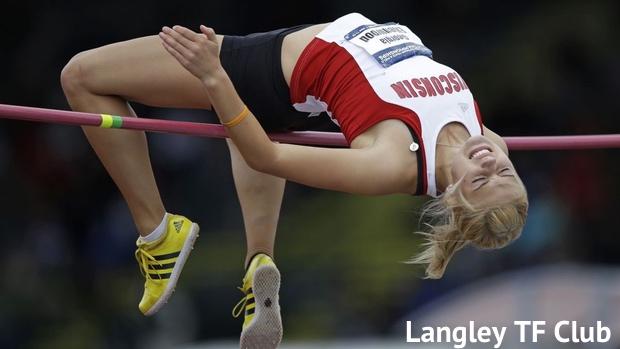 Since 2014, the Canada-based Langley Mustangs Track and Field Club has made a name for itself at the University of Washington's High School Invitational at Dempsey Indoor in Seattle.

The club's president, Brent Dolfo, calls the appearance "a vision trip to see what U.S. college sports look like," but what also happens almost yearly are top-rated performances by the club's amateur athletes.

This year is no different.

The club, which sits on the southern border of British Columbia, has produced standouts such as University of Wisconsin All-American heptathlete Georgia Ellenwood and will bring about 35 athletes to Seattle, including five high school-aged athletes who are seeded as high as eighth in each of their events.

"Our best kids have always competed really well there," Dolfo said. "Obviously, it's still early in the season, so we're not looking to peak. We're still in our regular training."

"It has the feel of a championship to our kids," said Dwayne Lotnick, Langley's head coach. "That's as far as competition goes. It provides a level of excitement because they're able to compete against kids above their age groups."

Previously, the Mustangs used to attend the Huskies' Indoor Open later in February before the UW High School Invitational existed. But when it debuted, Dolfo said the club naturally transitioned to the meet and has been coming ever since. In all, Lotnick estimated the Mustangs have been traveling to Seattle for "the last 10 years."

"We were always looking for something in January to reward them for all their hard work," Dolfo said. "And this indoor meet helps them transition to the outdoor season."

The Langley Track Club has approximately 230 athletes from ages 6 to 18, with about 50 competing for the high school-aged team that will attend the UW meet.

The Seattle meet is helpful, Lotnick says, because athletes can compete against athletes above their age group. In Canada, regulations permit that athletes can only contend in events against same-age competitors.

"For a girl like Brooke, she's very talented," Lotnick said. "We're hoping to get her in the top flight and see what she can do. In Canada, she doesn't get challenged as often. We want her to get pushed a little bit."

Fortunately for the club, athletes have bought into the culture and aspire for success beyond high school competition.

"We have a long-established track culture," Dolfo said. "The areas we live in British Columbia are the hotbed in the province, so we have a ton of athletes every year that we put into the college system."

That includes Ellenwood. The senior has seen major success at Wisconsin, where she was a first-team All-American in the indoor and outdoor heptathlon in 2016. She also finished 10th at the indoor pentathlon at the IAAF World Indoor Championships in 2016.

Her brother, Dean, competes at the University of Idaho, while Dolfo's daughter, Tanika, recently signed with Azusa Pacific, a Division II school in California.

"Obviously, whenever Canadians do well internationally, it raises the profile of the sport," Dolfo said. "Across the board, there are well-established programs, and we have championships comparable to those in the United States."

The prep system in British Columbia is somewhat different than in America, where high school programs dominate athletic development. With the Mustangs, Dolfo said the club system has mostly taken the role of development.

The indoor campaign provides athletes a path to train before their high school seasons, which take place approximately from April to June.

Dolfo said the plan for the club in Seattle will be as much about viewing progress long term as it will be to compete to win.

"We're not worried as much about events as we are about development," he said.

But Lotnick added there's an added motivation, too.

"Anytime you can showcase your talent, that's great," he said. "This meet definitely gives our kids exposure, too."