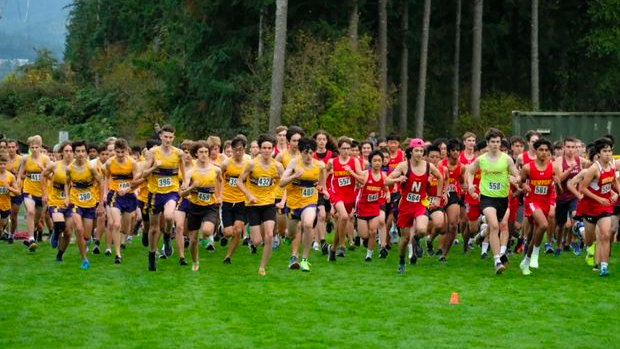 Some strong performances took place this weekend around the state!

For the three mile race on the boy's side, Jamar Distel (Riverside High School) scorched the rest of the field by more than 45 seconds, finishing in 14:12.54. Finishing behind him, still under the 15:00 mark was Brycen Gardner (Mead Senior High School) in 14:59.75. The third place spot was claimed by Brian Bowers (Lewis And Clark High School) with a time of 15:12.89. Bowers worked together with his teammate Evan Bruce as Bruce finished right behind him with a time of 15:14.89.

As for the team score, Mead Senior High School, with 92 points, narrowly edged out Seattle Preparatory School by 7 points for the win. Gardner's placing second overall was a strong factor in Mead's win.

On the girl's side, Macy Marquardt (Kennewick High School) also displayed a dominant performance over the rest of the field as she clocked a time of 16:23.70. Marquardt finished over a minute ahead of second place! Not to overlook her performance, Logan Hofstee (East Valley High School) came away with a strong second place time, holding about a twenty second gap between her and third place. Hofstee finished in 17:42.20. Kendall Carter (North Central High School) came out ahead of the pack to take third place overall with a time of 18:01.38.

For the team score, Mead Senior High School ran away with this one with a score of 43 points. Kennewick High School finished as the runner up with a team score of 109.

The team scores were very close with Puyallup Senior High School walking away with the win, posting a score of 92 points. Strong performances from Puyallup's #4 and #5 runners placed them ahead of Olympia High School, which finished with 98 points.

Central Kitsap High School (68) emerged victorious over Seton Catholic (89) as strong performances from their #4 and #5 runners helped them distance themselves from Seton Catholic. Central Kitsap had a 1-5 split of 0:53, a strong team display all around.

Rogers High School, with 37 points, took the team win for the varsity boys. Rogers' team success was due to placing five runners in the top fifteen. Chewelah was the runner up, trailing Rogers High School with a score of 58 points.

Liberty Bell Junior Senior High School girls won as a team with a perfect score of 15! Although they were the only school with enough runners to qualify as a team, there were other schools competing in the race.