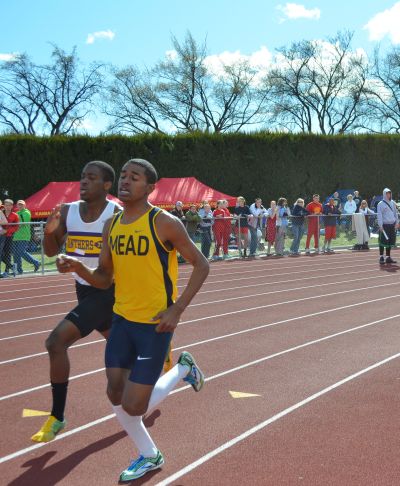 Brisk winds greeted fans and runners on St. Patrick’s Day but blue skies made the scene quite enjoyable, as the temperature improved during the course of the day.   It was reasonably warm at the end of the meet and the winds finally were reduced to a gentle breeze but that did not occur in time to aid those early events, which included the 3200 Meters.    With Wenatchee’s Jacob Smith being held out for another week of recovery from a stress fracture suffered during the fall cross country campaign, Kamiakin’s Anthony Armstrong was given a free reign, as he major competition  was a brisk wind.   Although his times may not suggest how formidable the wind was the Kamiakin star and his compatriots raced into a very strong vortex, when they headed down the track in a westerly direction.  In spite of the elements Armstrong zipped through the first lap in 64 seconds, which gave him a ten second advantage over the rest of the field.  He was on his own the rest of the way, save for lapping a few runners towards the end, as he raced to splits, that included a 2:16 800 Meters and a 4:41 1600M.   His times were hardly a great surprise after his impressive 3K run indoors a month ago but with the wind blowing in his it was hard to anticipate such a strong early season effort.   In the end he crossed the line in 9:26 well ahead of any would-be challenger and now will look forward to a trip to Arcadia, where he will challenge the best that California has.   While Armstrong was off by himself in front there was a duel between his Kamiakin team mate Austin Richards and Mead’s Kyle Sams in which Richards prevailed with a time of 10:37.  Sams finished a second later.   Justin Johnson of Moses Lake placed fourth with 10:48 & Micah Brazil of Cove in Oregon finished fifth.

In the girls’ race Emily Nordt of Wenatchee took the early lead and led through 800 Meters in a time of 2:54.  Michelle Fletcher of Kamiakin bided her time early but took over the lead, as she clocked 5:54 for 1600M.   The wind certainly was not giving her any help, when she ran past the finish line with one lap to go with a mark of 10:35 but she headed into the mini-gale one more time on her way to a victory in a time of 12:08.   Nordt held on for second in 12:19, while Emily Kump of Southridge took third in 12:30.  Kylie Bosch of Richland ran 12:37 to earn fourth for Richland and Samantha Yang of mead was Fifth.   Chelsea McClammer  of Richland competed in the event and recorded a fine mark of 11:14. 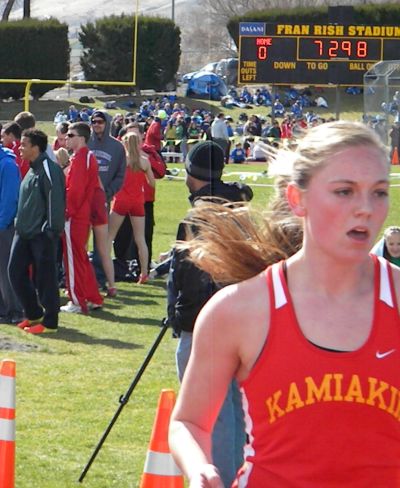 The boys’ 1600 Meter Run saw Andrew Gardner take the lead early and was en point after the first lap in 70 seconds.   Wenatchee’s Nicholas Boersma, who usually runs the 800 Meters and was coming off a 1:53 in the Brooks PRI meet, where he placed second and was the top American, ran conservatively in second but was quite confident in his speed at that point.  It was still Gardner up front, when they reached the 800 in 2:20 and it was it at that point that the race began in earnest.   The Mead runner upped the ante with a 60 second third 400M, yet Boersma still was able to reel him in before passing with 300 to go.   It was off to the races after that with a closing 64 (2:04 for the second half of the race) giving Boersma a victory in 4:23.20, while Gardner finished second in 4:24.50.   Given the conditions and the fact that it is just the beginning of the season both times were impressive.  Jean Paul Wolpert of Walla Walla finished alone in third with 4:27 and was followed by Austin Oser (4:33) of Kamiakin & Daniel Schofield (4:40) of Mead.   Ryan Francis of Richland placed sixth just a second later.

After a long afternoon with chilling gusts the wind finally calmed a bit and the temperature increased to make the final events reasonably pleasant.   Anthony Armstrong returned to the track for the 800 Meters, which was used primarily as a speed workout, and he rolled through a 59 second 400M on his way to victory in a time of 1:58.43.   His fluid form made it obvious that he was running well within himself and can now look forward to his California trek.      Benedict Wolpert finished second in 2:03 and Sean Hollenbeck edged Gregory Heller for third with both being credited with versions of 2:04. 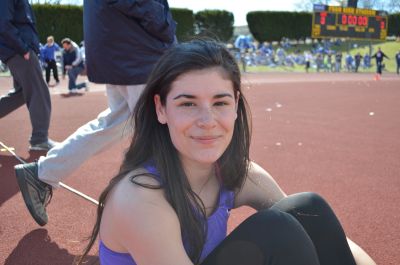 Audrey Ketcham of Wenatchee had high expectations coming into the High Jump competition but the wind made things difficult.  Still with blustery conditions she cleared 5-06, which quite an accomplishment considering all.  Elizabeth Quick of Richland & Melissa Merrill of Hanford both cleared 5-04.  Quick also competed in the Pole Vault and cleared 10-00, which shared the best mark of the day with Cadie Pratt of Mead.   Kyra Brannan of Kamiakin scored victories in both the Long Jump (17-04) and in the 200 Meters (25.50), while Gabby Hinojoso of Southridge was victorious in the Javelin with a heave of 123-11.  Ellie Heiden of Kamiakin ran a strong 58.30 to triumph in the 400M over Danielle Brandon, her team mate, who was clocked in 60.4.