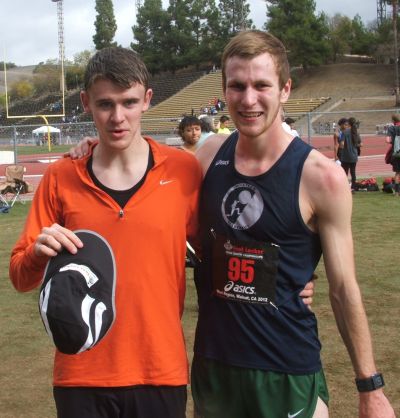 The race for individual supremacy among the West guys would be a very differnent affair than that of the girls.   Although they appeared to get away quickly the announced time at the 800M of 2:25 was hardly blistering,   Zach Perrin of Utah led the way and just off his shoulder ran Elihah Armstrong of Idaho, who is  just a sopomore.  Perrin continued to lead through the first mile, which was reached in 4:47.  There was a huge group over between forty and fifty runners close behind, which made it difficult to pick out too many individuals but Poli Baltazar of Washington was the first person from Washington, while Andrew Gardner was somewhere further back.  patrick Gibson of Squalicum, Washington held back in the early going and was maybe only in fiftieth place.
Armstrong took over the lead going up the switch-backs but Perrin regained the lead going back down it.   Still the key element in the race was the fact that there were so many in the race.   The field crossed over to the opposite side of the course, where two-time Foot Locker national finalist Andrew Gardner seemed to glide up the hill.  He noted afterwards that the pace had seemed a bit slow, so he decided to take the leader.  Of course even in going up the hill and passing runners, he still seemed remarkably fluid and at ease.   Five runners seemed to control the front of the race at that point, as they reached the two-mile in 10:08 - even a cruise up "poop out" takes something off the overall pace naturally.
Things really began to happen on Reservoir Hill, when Troy Fraley of Montana & Ben Saarel of Utah began to press Gardner for the lead.   After cresting the second of the two Reservoir hills Saarel bolted past Gardner and into the lead.   Gardner, for his part found no advantage in truly pushing at that point, as the key race is next weekend.   With that he relaxed in the confidence of knowing "there can't be ten runners, who can outkick me."   Of course it is downhill for the next portion of the race and Saarel, who placed eleventh in the event last year, pulled away from all challengers to win in a time of 15:28.   Troy Fraley of kalispel edged John lawson of California with both being credited with 15:37.  Conner Mantz, a sophomore from Utah passed Gardner for fourth and finished a second ahead of Andrew with 15:41. 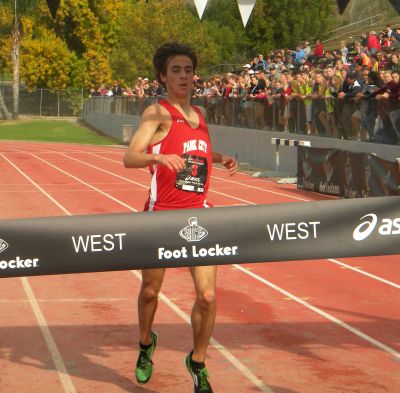 Utah's Ben Saarel breaks tape
John Dressel, a sophomore from the Spokane area, garnered sixth, also with 15:42 and Kramer Morton of Utah took seventh with 15:47, as he edged Zach Perrin, who placed eighth.   Patrick Gibson, who had moved into contention by the time he had encountered "poop -out"followed in ninth place in 15:48 and Poli Balthazar of Aberdeen, Washington, who had fallen back totwelfth, closed well on the track to earn the last slot to San Diego with his tenth place time of 15:50.   Elijah Armstrong, who had given it a great shot, came up just short and holds the first alternate position,  The Idaho Sate champion finished  four seconds ahead of Jerrell Mock, who had placed second in the utah 4A Division.
Caleb Webb of Californiaplaced thirteen by nipping Andrew Tellames of California, who also was credited with 16:01.   Clayton Hutchins and John Whelan of California both were given 16:02 and Richard Ho of San jose followed in 17th.   Chuk Mitchell of Utah, Garrett Corcoran of California & Aidan Goltra, also from California rounded out the top twenty.   Nicholas hauger of Spokane took 21st in 16:09.
The Northwest gave good account of itself with Levi Thomet of kodiak, Alaska placing 31st in 16:24.  Right behind him was Dillon Quintana of Washington, who ran 16:25.  Thomas Bradley of Blane, which is on the Canadian Border, finished 41st in 16:33 & Conner Johnson of Bellingham ran 16:43 to take 57th.   Cole Christiansen of Kodiak finished sixtieth and Julian Heninger of Lakeridge (Lake Oswego, Oregon) was 63rd.   Danial Amann of Washington came in 16:51 & Keenan Piper of Seattle was 67th.  Camden Stemple of Medford was the second runner for Oregon to finish with his 146th place finish on the unforgiving course.
The state team battle proved interesting with Utah defeating Washington 42 to 51.  Washington will send four guys to San Diego plus Katie Bianchini in the girls' race for a total of five runners overall.   Not a bad day at all.   As all Foot Locker events this was a well run race with prompt results but more importantly the health of the young athletes came first and the course was in remarkable condition, especially for those of us who traversed the same filed on Friday.  Even Katie Bianchini nnoted that she 'expected Washington mud' but California mud is different.   Of course in the end the fact remains that the Mt. SAC course was in amazing condition and that was thanks to Doug Todd & his crew, who deserve a lot of credit.  Now the fortunate few move on to our original and only true national high school championship,
which should be great races. 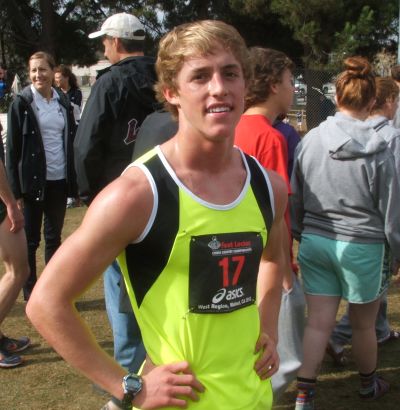