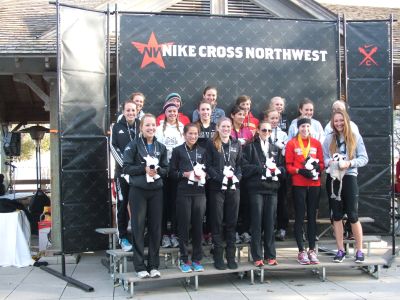 The NXN NW regional featured a fine duel between Amy-Eloise Neale & Katie Knight:   a second act continuation of their  2011 fall campaign rivalry.   Round two today went to Amy-Eloise, who broke away during the second half of the race and did not let up until she had achieved victory.  Neale's final time of 17:49 gave her a nine second margin over her North Central rival.
It was a good day for cross country with a brisk temperature and low humidity to go with a revamped course, which made the course well more difficult than it had been in past times.   The Eagle Island course has always been a challenge but the addition of more sand on the beach area gave it a much more difficult complexion.  The drive out to the course passes land with horses grazing off in the distance and the young ladies, who challenged Neale & Knight must have felt as if they were chasing a pair of galloping steeds, as the rivals assumed the lead early and left the chase pack for their own private contest.
Not even two minutes had elapsed in the event but the Neale - Knight show had opened a gap over the field by the time they approached the lake.   This is not to be construed to being disparaging to all the others, who composed a quality field with impressive credentials.  It is just that the rivals appeared to have risen to another plateau of fitness.  They hit the sand at the 5:20 mark with a greater lead, which was further extended by the time that they began their ascent of the hill.   Behind there was a race within a race between Emily Nist of Bishop Kelly, Megan Fristoe of Summit plus Erin Clark & Sara Tsai of South Eugene and Alexa Efraimson of Camas.  Further back the rest of the field was left to tack their own way into the mild breeze.
In last week's race Knight had seized the initiative during the second part of the race but today it was Neale, who pushed the pace and soon took the lead for good.  Katie finished with a time of 17:58.  Alexa Efraimson, who had finished third in the Washington 3A division last Saturday,  pulled away from Erin Clark and Sara Tsai to earn her second straight third place finish in a major race with a time of 18:23.  Clark finished fourth two seconds later, while her teammate Tsai added two seconds to that time.  Paige Rice, Oregon 6A champion, had a fine race taking sixth in18:35 & Idaho's Mikalyla Malaspina claimed seventh in 18:38.
Katie Bianchini of Glacier Peak joined her teammate Neale with her eighth place finish in 18:39.  Boise's Emily Hamlin, yet another state champion, took ninth in18:45 and Mayra Chavez of Washington came home credited with the same time for ten.   Oregon 5A champion Megan Fristoe of Summit claimed eleventh in 18:46.   Emily Nist had difficulties late, yet still fought her way to a twelfth place finish in 18:49.   Sarah Hastings of Crater annexed 13th with 19:00, while Sierra Manzer & Marina Roberts rounded out the top fifteen just ahead of Piper McDonald of Summit.   The other top twenty finishers included paige Gilchrist of Hellgate, Claire DeVoe of Lincoln, Andie Creel of Bozeman and Sanne Hanne of Cheney. 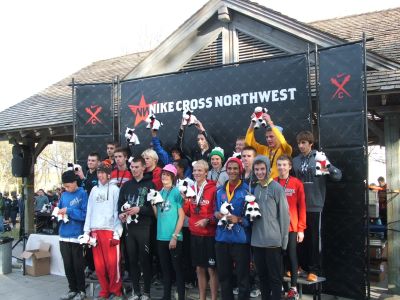 There was a bit of deja vu in the boys' race with Anthony Armstrong and Izaic Yorks up at the front except that instead of Nathan Weitz adding pressure to the pace it was Dallin Farnsworth of Idaho.  The two-time State champion held the lead through the early going and led the trio through a first mile in 4:55.  It was not the pace they Dallin had wanted but that was probably do to wind effect.   The trio continued to roll up the hill for the first time at the 6:38 mark in the race before they headed into the second lap.
Armstrong decided to try his hand at the lead for a spell and after about half a loop the Idaho star dropped back a bit.   From that point on the race was now essentially between Anthony & Izaic and it was Yorks, who took the point once they descended the hill and headed away from the lake.   That lead, however, did not last long, because Armstrong took charge late & opened a gap to come home first in 15:36.   Yorks, who has now had at least his third big meet in a row, cruised home in 15:39 and promptly thanked Anthony for being an inspiration. Dallin, who had already decided to run Foot Locker earlier, finished in third in 15:43.
With the afore-mentioned trio holding court in front Korey Krotzer of Auburn Riverside was forced to race essentially alone for a good part of the race, yet he zipped home fourth with a mark of 15:47.  Joe Hardy of Washington claimed fifth in 15:50 and Idaho's Thomas Rigby earned sixth.  Rigby, well aware of Krotzer's decision, went over to thank Korey for allowing him to get a berth on the bus to Portland.  Summit's Travis Neuman ran 15:56 finishing a second behind Rigby to take seventh and Kai Wilmot (15;57) led his North Central team to victory, as he secured eighth.  Erik Harris of Twin Falls ran 15:58 to garner ninth and shared his time with Portland Central Catholic's Kyle Thompson, who achieved his goal of finishing in the top ten.
Alex Kimsey of Spokane earned eleventh in 15:59 and was the last runner to break sixteen minutes.  Fellow Washingtonian Curtis King placed eleventh in 16:02 and was followed by Keith Williams.  Wolfgang Beck, like Thompson only a sophomore, came home 14th to lead Gig Harbor to a second place team finish.  Cody Curtis ran 16:09 to place 15th and shared his time with Marcus Dickson of White River.   Brian Eimstad of South Eugene, Sumner Goodwin of Spokane, Jaziel Rodriguez of Eisenhower & Nicholas Boersma of Wenatchee rounded out the top twenty. 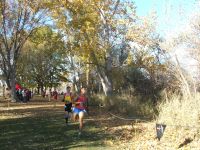 The team competition had been expected to be interesting given the ability of a number of teams on hand that not only fared well in their state meets, but could be found in the rankings.  There was after all a team from Alaska, West Anchorage, who were disguised as team Alaska & led by Lydia Blanchet (37th - 19:37) & Rachelle Roelle (38th - 19:37).  When you consider that their state meet & season had ended at the beginning of October, it was a tribute to their dedication that they were on hand.  At any rate, when the awards were handed out South Eugene was saluted as the winner.  With the brilliant races of their leaders Erin Clark & Sara Tsai it was certainly believable and the team began an impromptu victory celebration of hugs and smiles but their joy was short lived for a number of Sunset runners (Sarah Fahmy & Karen Qu for example) were credited as being from South Eugene, which skewed the results.  Instead of  winning with a low of 97 points, defeat.  they would find out that Summit, as overwhelming relief & celebration for Summit & the Peak, one has to feel for the lady Axemen, who had been handed the first place trophy and later had to give it back.   The story goes, that the Sunset & SE uniforms were too close & hence the confusion, yet all the runners wore chips, which should have eliminated that issue.  One has to feel for all the teams, who were forced to experience that range of emotion between elation and defeat tinged with despair. 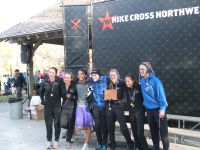 South Eugene Girls
The boys' race came down to a duel between Eastern Washington (Spokane) and Western Washington (Narrows League) with North Central winning the title once again with 95 points.  The Tide finished with 109, while the "Blue Train" (Seattle Prep) claimed third over Eisenhower 148 to 178.  Over course those last two teams at least had the chance to compete:  imagine how the guys from Palmer High in Alaska had to feel after coming all the way to Boise only to find that they were not entered in the championship race.  Jason Minturn of Palmer for the record placed third in the "JV" race.  Of course it took some time for results to be printed in the first place.   An interesting day all in all with two races being called back for a restart.   Then again with the races being finished there is now the decision where to race on the first Saturday in December.  My thanks to the cross country volunteers from Boise, who were warm and friendly.  Also my best wishes to Jacob Smith, who was forced to skip the race due to a lingering injury.  Jacob had taken time off earlier in the season & even passed on the Richland  Invitational yet it lingers.   Jacob is one of our nation's foremost runners and deserves a chance to display his talents on a national level.   Good luck to all runners, who continue on for the season.  We look forward to seeing many of you at Border Clash, where there is more time for interviews, and we will be at Mt. SAC taking part in three decades of running history. 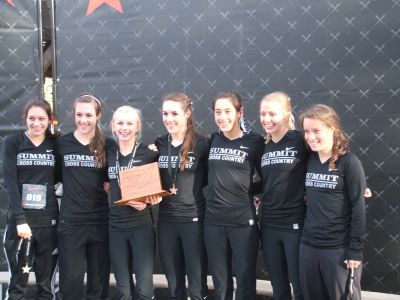