The rain held off, the temperature was mild and the Mt. SAC managed to get the course in
surprisingly good condition on Saturday.   It was then left to the young harriers to make the most
of the situation and thereby earn a trip to San Diego and the Foot Locker national championship. 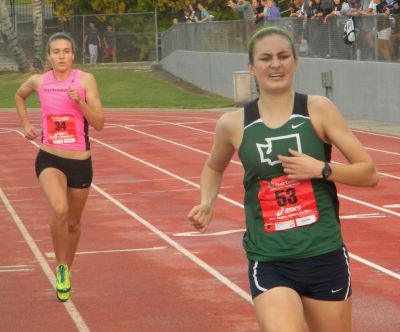 
The girls' race was the first of the two seeded races and it would offer a number of surprises, yet
one of them had already occured prior to that event, when Karlie Garcia took off on the
swich-backs during the senior girls' race and never looked back.   Garcia, the defending champion had missed the bulk of her season due to a stress reaction in her foot and was well "undertrained" in her own estimation.   Her winning time of 19:21 makes one pause and Karlie even wondered briefly, as she ran up the swich-backs, if she should be rrunning in the other race. That naturally left the door open to a number of runners but it was Marissa Williams of Los Angeles, who broke the door early and stormed through it.   She took the lead early and led at both the half mile (2:35) and the mile, which she reached in 5:11.   From there Marissa charged up the switch-backs and extended her ten second lead over the chase pack.
It's always a difficult decision to determine whether it is best to closely pursue a runner, who
takes off early bide one's time to hope the leader comes back to you later in the race.   Normally
on a course like Mt. SAC it is prudent to hang back and who would have known that Williams would not yield ground easily.  Marissa had secured victories at Bellarmine and Seaside but was only thirteenth at Woodbridge.   She had also placed second at Clovis but the previous weekend at Woodward Park in the California State meet she had 'only' placed 18th.   Well today was another day for sure and as she essentially challenged anyone to stay with her . It was only half way up the switch-backs that Julia Maxwell, the California D4 winner, decided to close the gap.
Williams made it to the cross-over to the opposite side of the course in nine minutes flat, which  also happens to be the half-way point in the race.   She now had a good twenty-five meter lead over  Julia Maxwell, while Makena Morley of Montana had postioned herself in third.   Close behind her ran Fiona O' Keefe of Davis, California.
The field was reasonably strung out, when it made the ascent of fabled "poop- out hill" and the one obvious thing was that the leader was not tiring.   Williams looked to be running within herself during the and then she sped down the hill and soon reached the two mile mark in 11:17, which gave her a fifteen second lead over Maxwell.   Morley still held on to third.   It was not long before the runners reached the first of the two "reservoir hills" and, although it was not known at the time, there would be little, if any movement as far as postition the rest of the way.
With 1200 meters to go Williams was at the 14:08 mark of the race and had the title well in hand.    She sped home in 17:46, which was a stunningly good time, given the conditions.  Julia Maxwell cruised across the line in second in 18:15 and was followed only two seconds later by Makena Morley  of Bigfork, who earned a return trip to San Diego.   Paige Gilchrist made it two straight Montana runners with her fourth place finish in 18:19 and Fiona O' Keefe claimed fifth with 18:33.  Glacier Peak's Katie Bianchini (Washington) proudly wore her Border Clash uniform as she came home sixth in 18:35 and  was followed by Madeline Ankhelyi  of Folsom, whoo ran 18:37.
The course had obviously taken its toll of the field, because  instead of a steady stream of runners, there were numerous gaps between the finishers.   Summer Harper was the first of two utah qualifiers with her time of 18:44 and Sarah Feeny of Ogden took ninth in18:51.   Kayla Ferron of Torrence, California nabbed the final qualifying berth and Erin Clark of Eugene, Oregon will be the first alternate after her valliant effort of 19:00. Clark had come oh so close to becoming the first oregon female finisher since Taylor Wallace, who now ran for the University of oregon.  Emily Rich of Utah did not miss by much either but her mark of 19:03, which left her in twelfth.  Danielle Shanahan (19:04), Emma Abrahamson (19:05) & Kylie Nishisaka (19:05) gave Californians control of positions thirteen through fifteen.  Sierra Manzer of Idaho (19:07) placed sixteenth and Californian Vanessa Estrada shared the same time finiishing 17th.  Presli Hutchinson of Pocatello garnered 18th in 19:08 and Annie Orr of Utah placed 19th three seconds later.  Sarah Fakler of Arizona rounded out the top twenty with 19:13.
The northwest gave good account of itself and there were numerous other runners, who ran well.   Sanne Holland of Cheney, Washingtonearned 27th with her mark of 19:19 and Sally larson of Cedar Park Christian in Washongton follewed in 32nd.  Brooke Lizotte of Alaska placed fortieth and Mikayla Malaspina of Idaho was 49th. 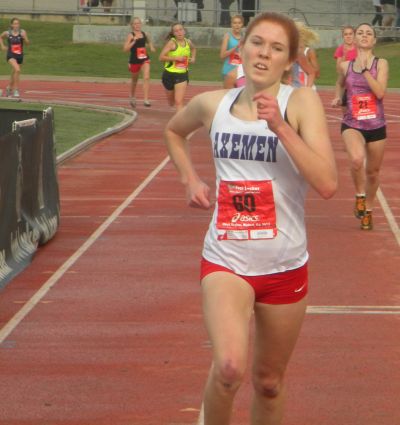